We went to Sumburgh on 31/08/16 it was really fun that day we also went to Jarlshof but that is a different post. When we went, we parked outside and we had our piece. We walked up the road into the visitor center. Inside the visitor center we passed costumes and post cards. Then we spoke to the archaeologist and we exchanged names, his name was Chris after that he asked us if we’re good at puzzles. We were, we did the puzzle quite quick, it was a puzzle of a time line from Stone Age to now. Then we went outside into what was a reconstruction of an Iron age house it had skins of animals that were really comfy there was a small lit fire in the middle of the room but the fire was smoking, there was an Iron Age style pot above the fire. We talked about if we would be able to live in there for a week if so what would we do, we said we could draw on the stone walls with charcoal or get leaves wood and sticks for the fire and some other things. We went back out side and looked at the real houses but they are really old and they didn’t have roofs.  After that we played a Viking game with logs and sticks the logs you had to hit down,  they were five logs for both teams and one middle log, you had to hit the middle log when the rest were knocked down. Then we got dressed in helmets and shields and took photos. 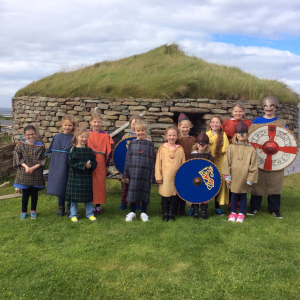 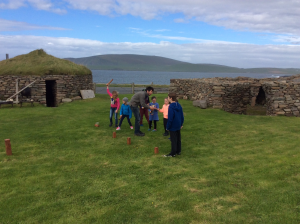