We all went to Lerwick on the ferry. When we got there the bus dropped us of at the museum where P1-P3, Miss Smith and Jennifer stayed to learn more about transport.  P4-P7 and Ms Breyley walked to Mareel to watch Anina which is a screen play film. It was in Spanish so we had to read subtitles. Her full name is Anina Yatay Salas which are all palindromes. We were all given paper to rate the film. The paper had  1, 2, 3 and 4 in the corners. 1 was poor, 2 was okay 3 was didn’t mind it, 4 was loved it. I rated it 4. After that we went to the museum to have our lunch and to meet back with the little ones. After our lunch we got on the bus.

At the pier we went to look at a tall ship. Then we went to the life boat. We were relived it was there so we walked across the pier where we met John who was going to go be our guide. To get on board the little ones got lifted over and the older ones took the ladder where someone met us at the bottom and helped us over. When all of us were safely onboard we went inside. There was a bench which could turn into 2 stretchers.  Also there was a ladder leading down to the bottom of the boat, we weren’t allowed down there. There was also another place which the crew went in they all had their own seats. When they have rescued passengers they put them in the bottom part of the boat to be safe however the passenger are never ever allowed in the room were crew stayed. The doctor has his own seat too. One of the crew members jumped into sea to show us how they rescued people he was called Adrian we had to yell help. The first time he got hoisted up with a hoist we had to help pull him up. Then he jumped in again to show us how they saved people with the y-boat. We had to yell help again. Then the other men Dieter and Iain saved Adrian.  When they were all on the boat Iain climbed up to show us his camera on his helmet that videos everything. He jumped in to the sea to video what it is like to be rescued.

Then we went to the Lifeboat station with John who showed us around. First he showed us the room where they kept the suits. John told us about the powder which stops the rubber rubbing on the crew’s neck and giving them a rash and it also slips on better. Everyone has their own equipment and they have their own pager.  The crew have to be no further than 3 miles away from the station for it to alarm them because they aim for a 9 minute call out. They also have their own locker where they keep their own suit and the clothes to wear underneath too. They are only two women who work there and lerwick lifeboat is the only life boat that has women and when I am older I want to join the lifeboat  as a volunteer. 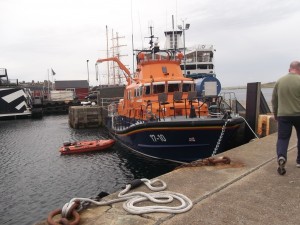