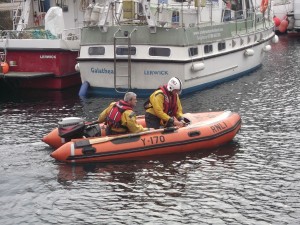 We went to Lerwick on the bus and we went to Mareel to the Screen Play festival it is where different films from around the world that you would not see but only in the country. The little ones went to the Museum. We went to watch a film in Spanish it was called Anina. It was a bit random because she had day dreams that did not make sense because sometimes she would have day dreams. At the end of the film we got bits of paper to rate the film on. We had to hand in the paper as we came out. At the very end we went to the Museum to meet up with the little ones.

We went to the lifeboat after lunch. We went on the lifeboat and we looked around the outside and the inside. I sat on one of the chairs it was the helm. Then we saw how the crew save the people. I learned that they do it with a hoist and they have to put the survivors into a room downstairs on the lifeboat but we did not go down.  We saw one of the crew jump overboard. We saw how they can get survivors on the Y-boat which is for inshore rescue. We came off the lifeboat and we got our photo taken and we walked over to the lifeboat station. We went into the station. We went to the room where they put on their survival suits. They put powder on the rubber neck of the suit so it does not give them irritation or rashes. Then we went into the next room. It was the history room and we saw loads of old photos of the lifeboat saving people. I learned that there was a man who got loads of awards for bravery. Then we went into the next room where they have meetings. I learned that they have a pager so they can give out massages out to the crew. It had some couches and on a picture there were loads of knots you can do. I learned that there are lots of lifeboats in the UK.