Once there was a little Fish called Splashy. She was a very brave smolt later in the story you will find out why. She lived with a mermaid. The mermaid’s name was Seastar. She had red hair and a blue tail. She was really mean. She was mean because Splashy was a pet she got for her birthday. But she didn’t like pets so she treated Splashy really mean. She only fed him once a week and made him sleep outside in some seaweed. One day when Seastar took Splashy for a walk, she bumped into a friend. When Seastar was talking to her friend Splashy managed to break off her lead. Splashy swam up to the surface. She popped her head up out of the water. It was misty. Splashy couldn’t see a thing but she could see a big bright light so she decided to follow it.  As she went closer to the light it got brighter and brighter then BANG! Splashy had bumped her head on a boat. The fisherman that was on the boat had seen Splashy and took it out of the sea and put it in a bucket of water. When Splashy woke up she found herself on a boat. The fisherman put on a watch so he could talk to Splashy then he said to Splashy what’s wrong you look sad then Splashy Said I swam away from home because my owner is mean to me the fisherman said I think I can fix that. So the fisherman put on a diving soot and went under the sea with Splashy. When they got to Seastar’s house the fisherman hypnotised Seastar so that she would be nice to Splashy and never be mean to her ever again. 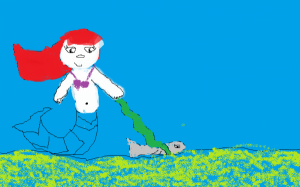