On Saturday I went to the Yell Show the Yell Show is agricultural show. There were activities    to do like lucky dip, tombola, hook a duck, the bottle  stall , needle in the hay stack and there was  a ball pool. There was  an ice cream van called Mr Stripey he sold ice cream and slushys. I had a waffle cone with chocolate on the top and stripey ice cream and a fudge stick it was yummy, later on I had a slushy it was yummy. At the end of the day I had an ice cream with a plain cone with plain  ice cream and a fudge stick . I won first prize and best in children’s knitting for my knitted mermaid which I am very proud of. Last year I won reserve best childrens knitting and I got a trophy, my sister Lucy got best in children’s knitting but this year I won it, yay! There were   other things to eat like barbecued foods, fish and chips and Candyfloss. Me and Abby (who is my cousin ) played in the ball pool  and I got stuck in the balls it very hard to get out of the ball pool. I got a balloon with Merida on it since there were no weights  left I had to tie it round my hand at the end of the day we collected all of our stuff and went home. 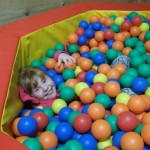