We went on the plane they said it would be 4hr but it was 2hr. When we arrived it was 35°C it was very late we went on the metro it is basically an underground train. when we got to the hotel We were on the top floor. The next morning we were going down the elevator on floor 2 there were a red fluffy cushion but we didn’t go on it. We went outside it was burning then we went to our cousins house their names were Violet and Edie. For lunch we had a bagette it was very yummy they were a lot of bread shops. After lunch we watch a movie it was in English the movie was wrack Ralph it was good. We went for walk up the road they were an ice cream shop in the shop they were so mane flavours but I don’t like ice cream very much. there were also sloshes I had tangerine sloshes they had cool straws what had spoons on the end of them. Then we went back to the hotel the air conditioning was cold. 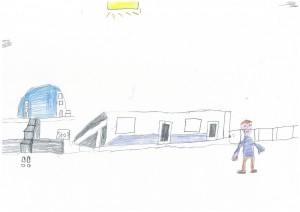