Once upon a time in a sandy desert there were two baby warriors born. One was a girl and one was a boy. They were both warriors ready to fight because they got the mark of bravery when they were born (it is like being christened.)There names were Manaj and Zana. They usually go out hunting with their dad at about 8 o’clock everyday to go hunting.  One day Zana got kidnapped, Manaj went looking for her. He found her in a cage underwater so he took a deep breath and dived in, he unlocked the cage and graphed her, and then he swam with to dry land with her. He carried her home and put a towel around her. When she woke she asked “What happened” and Manaj said

“You got kidnapped and put in a cage under water and I saved you.”

They had a party to celebrate Zana’s return.  Manaj asked Zana “would you like to dance” she agreed. 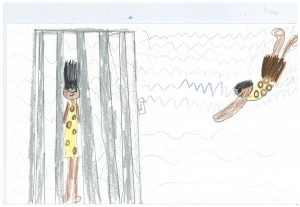