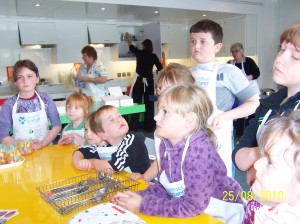 Yesterday we went to Lerwick and saw Robina at the Shetland Amenity Trust. They were 2 men in the office too they were called Paul and Howard. We splited in to groups and had a look at some dead insects.We went to the museum to look at all the rocks that were there some were old rock that had been crushed the little ones went with Jennifer  went to see the gallery. We saw a big wheel that told us what happened a long time ago. Miss  Breyley told us to walk around and find out about the old Shetland times. Then we went back to the bus and went to the co -op we broght  some fruit that people  chose what fruit they wanted. We went to the playpark on Kings Howard Street.We had our 5 a day and some people played on the swings and on the monkey bars. Then we went to the clickimin.We found the Cooking bus and went in we standed on the blue mat and  a lady called Sue told use what we had to do. They were another lady called Jem. They told use what we were making, for the first  time I chopped a tomato and a pepper and I really enjoyed it. At the end Jen made us some strawberry smoothie.