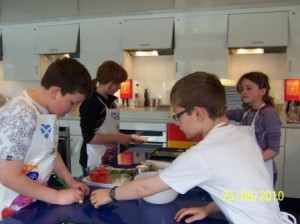 We went to Lerwick to go to the Cooking bus but first we went to the Shetland Amenity Trust. In there the big ones looked at insects with Howard and Paul and the little ones looked at rocks with Robina. We swaped after a while so that the big ones looked at rocks and the little ones looked at insects with Paul and Howard. Next we went to the museum car park and had piece  in the bus then we went inside with Robina to look at the rocks and how they were formed in Shetland. The little ones went to the galary to look at paintings and the big ones stayed to look at rocks and I learned where oil comes from. After we went to the Co-op to get fruit for piece. Next we went to the King Harald street play park for sandwiches and stuff. Then we went to the cooking bus at the Clickimin car park. The sides could fold out. The first dish we cooked was Tomato and Basil tartlets and Sue  showed us how to cook it. After every body went to a table and got cooking. Next we cooked sunset pasta saled and Jem showed us how to do it  and how to use a knife and then we all got cooking. We only had one bowl on each table we devided the the bowl into four little tubs. Then we all got smoothie with Strawberrys, Rasberrys, yoghurt, honey and milk then Sue handed out bags that were made from corn starch and folders with recipes and a cooking bus net.