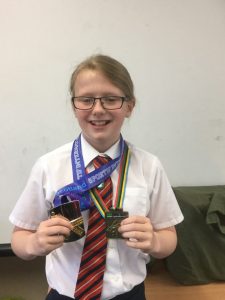 A huge well done to Rachael who won a Gold medal two weekends ago at the Sportif International. She had to fight many much bigger girls and even came up against a girl who had bet her before. But thanks to her hard work and effort, she triumphed and won!

Then after a tiring week at our residential trip, Rachael travelled to Northern Ireland to compete in a huge competition. She fought a girl three times and won! She was awarded a Gold medal. Congratulations!