July 18, 2019
by Mr Murray
Comments Off on Website Update

We have been using our school App for a year now and it has proved very popular in improving communication.  We are also using Twitter more regularly to celebrate success from the classrooms.  Our website will still be used as a place to find key information, policies and plans.  However our App and Twitter will be used more regularly and updated daily.  Our Parent Council will also be launching a new Parent area which will also be linked to our App.

January 21, 2019
by Mrs Smith
Comments Off on Knowetop Parent Council

The next meeting is Thursday 24th January at 7pm. All are welcome and entry is via the main door at the car park. Agenda items should be sent to knowetopparentcouncil@yahoo.co.uk. We hope to see many there as we seek to appoint new Office Bearers.

December 6, 2018
by Mr McCulloch
Comments Off on Glee Club

A letter should be sent home today for pupils in Primary 5 – 7.

We are interested in running a Glee Club for regional and possible national competitions in the New Year. A maximum number of participants is specified by the organising body.  To allow equality of opportunity for all of our very talented pupils, singing auditions will be held for interested P.5-7 pupils next week during lunchtimes. Stages will be advised of their days and be provided with the audition song lyrics below. Pupils will then progress to a small dancing audition in January and be advised of final decisions after this. Due to photo and filming being part of the competitive element of these events, permission for photos and filming will be a requirement for participation and pupils should only audition if they are willing/able to allow sharing of their photos/videos on social media platforms and for possible advertising purposes for the events.

The audition dates are as follows:

All auditions will take place in the digital literacy suite.

Please sing the following section of “The Greatest” by Sia:

November 30, 2018
by Mr McCulloch
Comments Off on Primary 4 Christmas Choir

As you may know, our Primary 4 group were asked to take part in this year’s Regent Shopping Centre School Choir Competition. The pupils, staff and Mrs Wilkinson managed to pull off a winning performance within a week and managed to make it into the top ten.

Voting is now open at the page linked below. We would appreciate your votes to support our fantastic Primary 4 singers and all their hard work. Pass this on to anyone you can to vote and get Knowetop to the top! 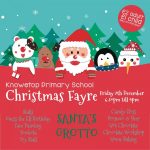 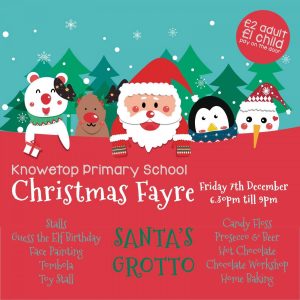 Come along on Friday 7th December to the Knowetop Parent Council Christmas Fayre.  Tickets can be purchased from the school on Tuesday 4th and Wednesday 5th December and also on the night.  We hope to see many of you there.

November 2, 2018
by Mrs McGinty
Comments Off on Pupil Council Children in Need Event

On the 16th of November the pupil council are holding a fundraising event for children in need.  Here are some of the pupils ideas:

October 26, 2018
by Mrs Smith
Comments Off on Parent Council Meeting

The next meeting of the Parent Council will be Thursday 1st November at 7pm. All are welcome and entry to the school is via the main door at the car park. Any items for the agenda should be sent to knowetopparentcouncil@yahoo.co.uk Thank you

Please note tomorrow, Friday 12th October, is the last day for Christmas Card orders to be placed. Please send money and forms into school with your child.

The Parent Council will hold their first meeting of this year on Thursday 6th September at 7pm in the school staffroom.  Entry to the school is via the main door at the car park.  All are welcome and we hope to see you there.

AGM meeting of the Parent Council at 6.30pm tonight.  Entrance is via the doors at the car park.  All welcome.

Welcome to Knowetop Primary's new website. On here you will find week to week news about what's going on in the school.