In August 2016, two of our nursery team, Mrs Smith and Mrs Broughall, attended a city run course called Play on Pedals. The programme instructed our nursery children on how to ride a two-wheeled bike. This was done through a series of fun games and exercises on balance bikes that were provided through the local authority. When they were ready the children were then encouraged to have a go at riding a two-wheeled bike themselves.

The team had been learning about growth mindset and were using mindset language and building resilience in the children through adopting a ‘praise for effort, never give up, you can’t do it yet’ approach. This attitude and mindset was applied and encouraged by staff during the play on pedals programme. 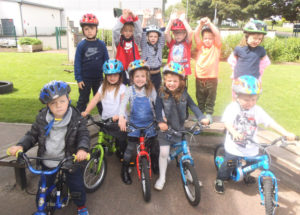 This has been an unbelievable success and I have no doubt it has been spurred on by the growth mindset approach encouraged by the staff in our nursery.  It was fantastic to hear the children so proud of their achievements and the realisation and acknowledgement that their efforts and perseverance had paid off.

I believe that this will build a good foundation and set our young learners off in good stead as they carry on their learning journey into primary school. I have high hopes that they will carry on developing their growth mindsets in the knowledge that they can do something if they put the effort in, keep trying and never give up!

Has your school or nursery been developing children’s growth mindsets to help them achieve goals or challenges? Let us know! Either leave us a comment or email alison.hennessy@winningscotlandfoundation.org

Embedding a growth mindset culture in schools across Scotland