Growth mindset is alive and well in the early years in Dundee. Ashley McKean,  teacher at Jessie Porter Nursery told us about one particular little boy, Gabriel, and his experience of learning about mindset.

Gabriel was busy with his creative play at the drawing table with a member of staff. We were discussing his picture when he paused for a second, taking his time to answer a question I’d asked. I said that Gabriel was “thinking very hard” about his answer. Gabriel responded with “the neurons in my head are sticking together when I’m thinking.” Immediately impressed, I asked Gabriel about his knowledge of neurons. He replied that he knew they were in his brain, and pointed to his forehead. At first, he thought we had “two neurons”. Together using the internet, we explored neurons and brains, finding out that we had lots of neurons!

Gabriel began asking questions about the brain, and we investigated the differences between our brains and animal brains.

Gabriel’s Dad told us that Gabriel’s knowledge about neurons came from the TV programme, ‘Nina and the Neurons’.

Gabriel’s Mum shared her excitement about her son’s learning with our nursery twitter page.  “Just had my four year old tell me the neurons in his brain join together when he thinks! #growthmindset @JessiePorterNS “

Gabriel’s interest has encouraged others to ask similar questions.
We have over 10 children who have formed a small learning group, focusing first on our brain. We have followed the children’s interests and questions, learning alongside them. We are teaching the children that lack 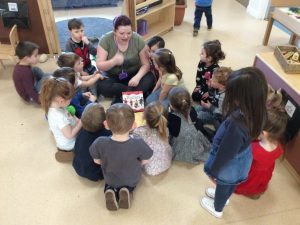 of knowledge is not a barrier to learning; we just don’t know something yet! Adults are role modelling problem solving, giving children the skills and strategies to believe in themselves and to achieve what we know they can!

Being an Attainment Challenge school, we have a focus on raising children’s learning opportunities around health and wellbeing. We understand that when we start from the interests of the child, they are motivated and engaged in the learning process, benefiting from rich learning experiences. Next, we are aiming to make links with Dundee Science Centre, hoping to reinforce learning about the brain. We would like to encourage our families to use the Science Centre, promoting their child’s learning experiences, encouraging them to think and explore for themselves.

If you have any great examples of how the children you work with have been learning about mindset then we’d love to hear more! Either leave us a comment or email johnpaul.fitzpatrick@winningscotlandfoundation.org

Embedding a growth mindset culture in schools across Scotland