As part of the social studies module we have explored how important the quality of engagement with the subject is. As one of our workshops we went to Mcmanus galleries and discussed how relevant field trips can be to the development of a child’s understanding of the topic they are learning within social studies. This trip and discussion around field trips inspired me to go on my own field trip and further my own learning in this module. I decided to visit the newly refurbished Bannockburn center, in Stirling.

Prior to my visit to Bannockburn I wanted to find out why and if active learning is beneficial to learners. The main message coming from why actively engaging children in their learning is crucial, is due to how motivated learners become towards their learning (Rosemary, 2006). If children feel motivated and excited about their learning, they are more likely to enjoy and remember the experience positively. This in turn installs a love for learning, which as a teacher, is what it is all about. I then took this information and wanted to see if the Bannockburn visitor centre would capture this active side to learning.

Firstly, this location is perfect for a class learning about Scottish history, specifically the Battle of Bannockburn as the site is situated where the battle took place all those years ago. Immediately this sparks the children’s imagination as to what this battle may look like and will encourage inquisitive and curious thinking. The center allows you to explore the grounds and has a statue on the site of Robert the Bruce, which will also spark questions and give children the opportunity to enquire about who this man was, his relevance to the battle of Bannockburn and what he did. This can allow discussion about Scottish independence, why they were fighting for this, which then explores the idea of democracy and this can then be linked to the present day and the recent vote for Scottish independence back in 2014. This captures the essence of social studies and how it allows for children to explore their past, present and its people simultaneously. In addition, the children are able to explore the land of the battlefield first and analyse how different aspects of the environment may have aided the army and their strategies to win. For example, the Scottish army had scoped out the land and made themselves aware of any marsh land that may impact their performance, in addition any rivers or lakes that might delay them in battle. This gets children anaylsing aspects of the land which explores the physical geography (The Battle of Bannockburn, 2014). 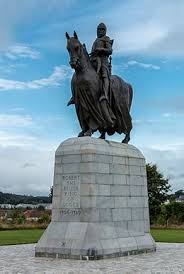 The center also provides many other facilities for children to explore the Battle of Bannockburn. Upon arrival, you are given a pair of 3D glasses, which is then explained that they are for the 3D meeting key characters of the battle and viewing the battle in action. Immediately this would excite the children as they feel involved in the battle personally. When you make your way round into the first section, you are shown a 360’ video which has clips from what it would have been like in the run up to the battle and throughout. With the 3D glasses on you can see arrows shooting past you and watch knights on horses galloping past. The video is so inclusive that you forget you are a visitor and feel immersed in the battle atmosphere. As I was making my way round the centre I was thinking how active and immersive this experience is and how valuable this trip would be to consolidate or further children’s learning on the battle of Bannockburn. After the first video clip your guide informs you that you have 15 minutes to walk round and meet the characters involved in the battle or who lived during that time. You are advised to carefully take note of key information the characters give you as this may give you an advantage in the battle. This not only gives the children a key learning focus, it also motivates them to listen and take note as this information may help them win the battle they are about to step into. The characters are all animated and you stand in front of their screen, to get them to speak you place your hand up to the screen and they begin to share their story. By speaking to these characters you learn some key strategies on how to do well in the battle, and also learn about what life back then was like.

Once your 15 minutes is up you are called to gather back around in the centre. You are told to prepare as the battle is about to begin. If you were put down to participate in the battle, you enter the battle room first. The guide then tells you were to stand around the table. 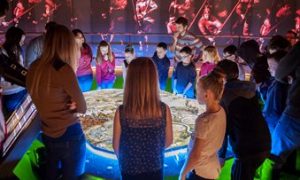 As you walk in you are given a country, Scotland or England. The guide then allocates each armies leader, and asks them to begin the battle by deciding what move their army makes first. Person by person, or should I said soldier by soldier, the armies progress in the battle. Each move is vital and can lead to invasion, so it is crucial that each soldier thinks strategically about their next move. As I was taking part in the battle, I was thinking about how active this learning is and how exciting this would be for children learning about the battle of Bannockburn. Eventually the battle is finished and one army is crowned the winner. Unfortunately I was on the losing army, however, it did show me just how intense this battle would have been and how fast the armies would have had to think on their feet.
After the intense battle for independence, the guide directs you round the centre and you are brought to another video clip. The animated story tells you all about what happened after the battle and is a nice conclusion to the 3D experience.
The final part of the experience is the ‘dress up room.’ This always just sounds like too much fun and irrelevant to the learning, however, after this visit, I would have to disagree. The guides let you try on armour that is a very close representation to the armour worn back in the battle. In addition, you can put on helmets and carry shields and weapons to get the whole experience. What shocked me was the weight of the armour and how heavy it was. It made me think back to the battle room, making all those hard decisions and then having to do in under all this heavy armour. It puts you directly in the shoes of the soldiers and gives you a glimpse into what they went through. Therefore, I believe that this finished off the experience nicely and wasn’t just all fun and dress up.
During my visit I also learned that the centre accommodates for school trips and encourages classes to visit. They also provide post classroom activities, such as editing your own battle re- enactment, creative writing stimuli and a conflict of choice presentation designed to stimulate conversation about the battle and why it took place. 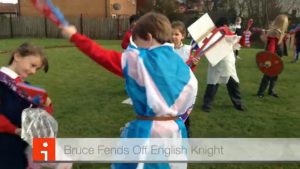 Overall it is a great place to support and further learning in the classroom. The entire visit epitomises active learning, and gets children involved and actively thinking about the battle.

The Battle of Bannockburn. (2014) What to expect from your visit. Available at: https://battleofbannockburn.com/visit/ (Accessed: 20 October 2018).