Our first values workshop started out as what seemed like a normal group task. We were randomly split up into four groups, I was put into group one. We were given an envelope which contained a variety of resources including rubbers, pens, etc.. Little did our group know, that we had been given the best resource pack compared to the other groups. We were then asked to use our resources to come up with something that would be helpful for first year students coming to university. It was very easy for our group to produce an idea as we had a lot to work with. Our end result was a “starter pack” which included a campus map, stationery, useful numbers and emails.

All throughout our task, Carrie our lecturer, was very engaged in our groups working; always giving us compliments and listening to our ideas. She spent a lot of her time over at our table, asking us questions and getting involved. This enthusiasm continued when we presented our idea, she seemed very interested, giving us eye contact, and good feedback. This gave our group a sense of achievement; making us feel good about our work. The response Carrie gave us however, was the stark opposite to the one she gave group four. She was looking at her watch, out the window, and didn’t acknowledge their hard efforts despite having very little resources in comparison to our group.

After noticing Carrie’s lack of enthusiasm towards group four, she then explained the aim of this task; which was to represent the structural inequalities in todays society. It then became clear that group one represented those in society who have a lot of wealth and status. Compared to group four who represent those in society who struggle with living costs and day to day expenses. The task also highlighted the way people are treated depending on how much status they have. Group one were constantly being encouraged and praised, compared to group four who were ignored and looked down on. This demonstrates how in society those who are finically stable are looked up to and given benefits. Where as those with lower incomes, are often ignored or not given opportunities to better their situations.

Overall, this task was very stimulating and made me reflect on the structural inequalities that occur in everyday life. In relation to the field that I will be going into, inequalities appear frequently; and this made me realise that as a professional I will have to work to try and eradicate these inequalities as best as I can. There are children of all backgrounds that walk through the classroom door, and as a teacher, it will be part of my job to make sure that those backgrounds have no influence on the type of treatment that child receives. Every child should be given the opportunity to use their education to flourish into confident individuals; who have the chance to do whatever they aspire to do.

Why not? I have never understood the reasons behind others not wanting to become teachers. I love working with children, watching them grow as individuals and seeing their enthusiasm towards learning. I have always liked the idea of becoming a teacher, after gaining experience however, I now love the idea of becoming a teacher.  As cliché as it sounds, working with children and seeing them progress as a result of your input is very rewarding. In addition, I love the creative aspect of the job. Teaching allows you to inspire future generations, whilst being fun and imaginative; making the learning environment a fun and positive one. Teaching brings new challenges everyday. I love variety and therefore love teaching. 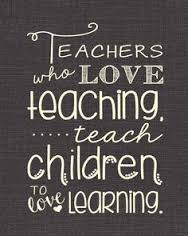