The Senior Phase Academies will continue to develop with the intention of having six academies (foundation apprenticeships) in place by 2020.

The Developing Young Workforce agenda is also linked to these new academies.

Recruitment for the three Senior Phase Academies is underway with a closing date of 18 March.

The courses on offer from summer 2016 are:

These courses were showcased at the recent Local Opportunities Event in Anderson High School. Pupil Support teachers are working with pupils considering these courses.

Paid summer jobs are in place for all those undertaking each of the three courses.

More information can be found at:

This event took place from 23rd to 26th November 2015 at 101 Park Street, New College Lanarkshire and was aimed at S4-S6 pupils from all 23 secondary schools who are Christmas leavers in December 2015 or who are in their Senior Phase of Learning and looking to obtain a positive leaving destination but unsure of what direction to take. 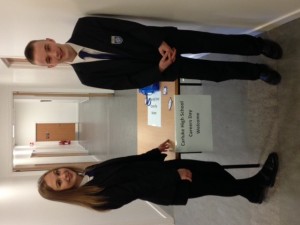 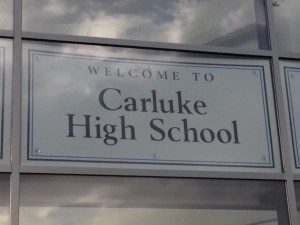 On Thursday November 19th, 2015, Carluke High School in South Lanarkshire held a Careers Day. The event was organised by Head Teacher Andy Smith, John Shearer of Pupil Support, and four other members of staff. At this event, employers were invited to give talks and workshops with all students S1 – S6. Students signed up for a minimum of one and a maximum of four sessions, with the average being two per student.

The choice of sessions on offer were extremely diverse. These included:

Prior to the event, all students chose their workshops based on their personal career interests.

There were several presenters who had personal links with Carluke High School and were supporting their alma mater:

One of Nikki’s high school classmates in Advanced Higher Geography was Fraser Russell. He also studied Geography but at the University of Glasgow and then completed a Master’s degree at Strathclyde University. He is now an Environmental Consultant at Envirocentre in Glasgow. When asked how he found out about Carluke’s Careers Day, he said, “Nikki sent me a message on Facebook!”

The keynote speaker for the day was Derek Stewart, Managing Director of Strategic Asset Managers Ltd. (SAM). Derek left school after S5 and went straight into employment in a variety of jobs. He worked his way up over the years and has now worked in Finance for 37 years. 17 years ago he set up his own business and is very supportive of work placement opportunities for students. Also, he does inspirational speaking based on his endurance competitions such as the Ironman Challenge to raise money for Maggies Centre of which he serves on the Board. The theme of his address was “Growth Mindset”.

Skills Development Scotland (SDS) were also present at the Careers Day. Helen Sutton and Adele Duffy have worked for SDS approximately 13 years each. They work in Carluke High School 3 full days a week. They provide CIAG for Senior Phase students. Also, they advise on Modern Apprenticeships in Construction, Hairdressing, Plumbing, Mechanics and Childcare. They informed us that Lesmahagow High School is going to be an early demonstrator of the Career Education Standard in April 2016 with S3 students.

At the end of the day, I spoke to a S5 student. She stated, “I still don’t know what I want to do”. But the promising news from the Careers Day is that she said she was now aware of the many pathways available to her including volunteering, work placement, apprenticeships, college and university.

As part of the Careers Day, each student completed a logbook for each session including the speaker’s name, their profession, how and why they chose their job, their qualifications and notes on the talk. Then the students linked the sessions to the subjects they are currently studying. In the logbook, they completed a list of careers linked to each subject, why it might appeal to them and how interested they are in doing that job. 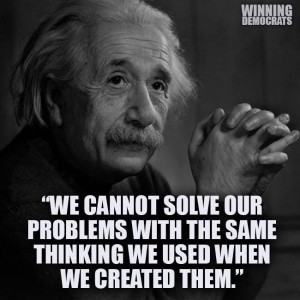 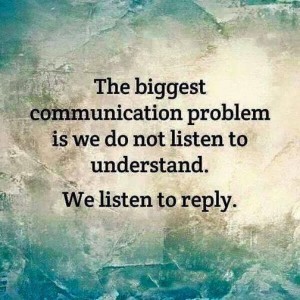 Are we listening to our learners to understand their needs, desires, frustrations, concerns with regard to their learning?

Are we listening to our partners to understand what support they need with regard to DYW?

Are we listening to our colleagues to understand how we can work more creatively, collaboratively, positively together to achieve our aims and goals?

Are we listening to young people that are NEET to understand what support they still require to achieve their goals? 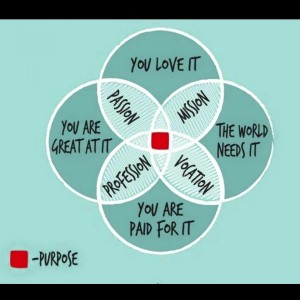 If you are participating in the U Lab online course, you may have seen this picture posted on their Facebook page.  It really made me think not only about helping young people to find their purpose, but identifying my own personal Passion – Mission – Profession – and Vocation.  If it’s that challenging for an adult who has been through education and is in employment to identify their purpose, then how hard would it be for young people with little life experience?  I feel that it is vital to start at a very young age with CIAG to help young people identify what they love to do, what they’re good at, and what career prospects are possible and available to them. 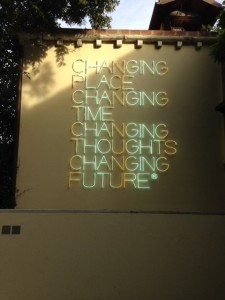 On a recent holiday, I visited the Peggy Guggenheim Museum in Venice.  There I saw the installation in this photo – “Changing Place, Changing Time, Changing Thoughts, Changing Future” by Maurizio Nannucci.  This resonat2ed with me and I thought it can easily relate to “Skills for Learning, Life and Work” with young people and DYW.  They “change place” in their progression from primary to secondary and further/higher education and training.  “Changing time” can relate to when learning occurs.  For some students this could be a mainstream route of primary – secondary – FE – HE – employment. But many students of all ages will not have a clear path such as this in their learning.  “Changing thoughts” can relate to changing people’s thoughts in relation to the Senior Phase.  Education and training is no longer just traditional Highers and then progression to university.  Learning can take place in apprenticeships, volunteering, activity agreements, other awards, work placements and more.  And finally “Changing future” – which is what we are all aiming to do with DYW to positively change the futures of young people in their education and employment.  Please let me know your thoughts on this.  Many thanks.  Scott