We have been using film literacy and voice-recording to develop our learners’ comprehension of a text.

We watched this video: Dragon Slayer | A Short Film by Robert Kuczera and then used stills from it after the viewing to ‘read it’. The pupils in the class were given one picture each to make notes about what they
could see in their photo. They were then asked to put the photos in order that they felt the story took
place.

Having put the images in chronological order they were asked to use their notes to narrate the story by using an Easi-Speak microphone, which in a previous lesson they had been taught how to use, to record and download. Listening to what had happened, it was passed onto the next speaker to build upon the story with their own ideas.

The class loved developing the story and sharing their narration with other classes. So, the following week  they were given a storyboard with fewer shots and asked to retell their story by adding a twist to the story line. Once again, the children enjoyed developing their personal story, with the ideas they had previously generated as a class.

This is the story board they used: 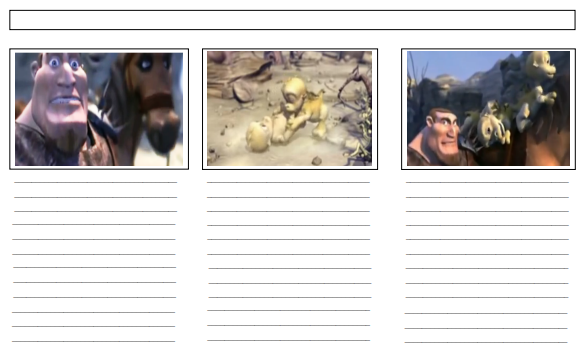