Since lockdown kicked in my main concern as a teacher has been – how do we reach our learners? Pupils had all been given their Glow logins and passwords before the school closed, so we all created Glow groups and started sending tasks online. People rose to the challenge, sending fun, modern meaningful lessons with variety and structure.

Then the reality of Digital Literacy kicked in – many young people struggled to access their work and for those who did see the emails and reply, attaching a document was not straightforward. It is often taken for granted, Digital Literacy. There is a general expectation amongst adults that young people are ‘whizz kids’ with technology. In my experience, across a number of schools, that is not the case.

Our Council is providing iPads to learners – this plan was in place well before Covid19. It is a staggered rollout, so some schools already have their devices, and some are still scheduled to receive theirs over the coming months. Being an active member of the Digital Working Group, I had already started preparing. I have a Student Digital Leaders of Learning group and they were creating resources for use across the school. We had iPad training events where we promoted the use of OneDrive so that lessons were readily accessible on staff iPads. I started a Digital Newsletter to smooth the transition to Apple:

When staff were issued iPads earlier than planned it looked like we were all going to have ample time to prepare ourselves to support learners with their iPads. But now we aren’t in school. Collaboration and development opportunities have been lost and our priorities have swung towards doing the best we can with what we have, and adapting rapidly to the ever-changing needs of our learners.

Most of our learners have a device of some sort at home (some don’t, and they’ve been sent Home Learning Packs). I did a short video on how to access Glow, showing learners how to add to their Launch Pad and which Apps they would need. As my first wave of lessons went out, I quickly realised that pupils who would normally embrace the tasks weren’t responding to the emails. The Glow groups default meant that emails to the Group weren’t going to their Inboxes and instead could only be viewed if the pupil went into their group. If you access Glow from a browser like Safari or Chrome on a mobile, you can’t even see the Groups menu. I filmed a short video on how to access Glow Groups from a mobile, and I changed the defaults on my groups. We put it on the school’s Facebook feed and waited. Gradually, there were more responses coming in, but still not as many as we’d like. 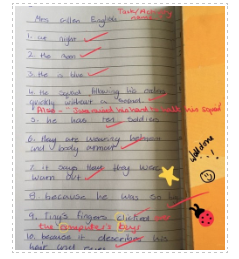 I had screen recorded some of my lessons, doing a voiceover and taking my virtual learners through PowerPoints. I also downloaded my class novel and audiobook, and screen recorded my Kindle as it read the first chapter of the book. I sent these out and settled into some semblance of a routine. My younger learners really enjoyed the videos and were taking photos of their work and sending it in. I used Mark Up and my Apple Pencil to correct and offer feedback, drawing sparkly stars on their work and sending it back. It was when I was chatting to teacher friends on WhatsApp that I discovered that this, too, wasn’t common practice. I recorded a short video showing how I Screen Record a PowerPoint lesson, then sent it to my WhatsApp group. The questions then came back thick and fast – but where is my screen record button, how did you get Kindle to read the story etc. I responded, adapted my videos and sent more. I then started to drop them onto a YouTube channel so that they would be easier to find. I’ve improved them a bit, using iMovie to edit out passwords and adding a little background music to the ones for learners. I’ve since added clips on sending Word documents, logging onto Glow in Word, and using the dictate and Immersive Reader on Word. I have plans for more. 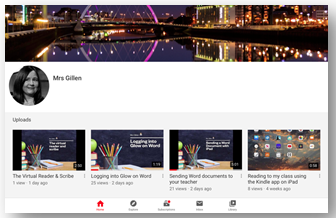 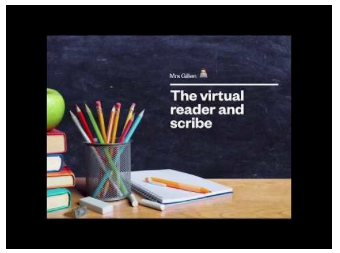 These have all been in response to questions sent to me, both from pupils and colleagues. I’ve had some lovely stories sent by pupils since, all carefully typed into Word then shared links on Glow. Still not as many as I’d like.  I’m hoping that once we are all back at school I’ll gradually be able to show my other learners face to face how to do these things, so that they can continue to build on their digital literacy skills and really make the most of all the fantastic resources available to them online. If learners have the technical ability to access and respond to the lessons, it will improve their blended learning experiences. We are now gradually introducing Teams to learners, and using it for lessons; I think this will be where the fun really begins!