Above Scotland took an aerial photography exhibition as the starting point for an ambitious creative journey, empowering schools to make a difference to their local environment of such ambition that it could be photographed from the air. 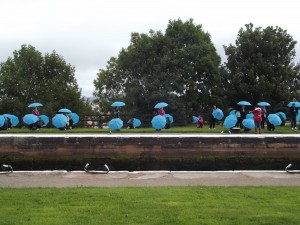 Large scale aerial photographs taken of the areas around participating schools inspired thinking about the participants’ place in the world and served as a stimulus for their very own creative process. This developed the learners’ creativity skills and culminated in a pupil-designed intervention that meant something to them in relation to the landscape and their community.

Created and led by Architecture and Design Scotland’s dedicated Education team, it was the project’s exciting new partnerships between schools, DO Architecture, and RCAHMS that made the ambitious plans possible.

Learners from Inveraray, Inverness and Harris gained an understanding of their environment in terms of how it affects theirs and others lives. They considered the impact of the built environment and landscape on communities and translated their thoughts and opinions into a creative output, working with others to communicate a message about the place. It was vital to the project that the intervention took place on the site concerned, building a close relationship with place and fostering a deep understanding of the landscape.

Above Scotland used material from an exhibition at The Lighthouse, Glasgow, as a teaching resource to initiate a creative process. The project facilitated learning about the built environment and landscape, alongside the development of creativity skills. The project also gave the exhibition a legacy beyond its time at The Lighthouse and humanised the exhibition, making it more accessible.

“Proud to have been involved in this super exhibition, as Headteacher of the two schools involved on the Harris content. It was a true Curriculum for Excellence experience for the children who took part.” Headteacher

“It was good because we learnt stuff but in a funner way than just sitting in class.” Workshop participant

“The best bit was we got to decide what we wanted to do rather than being told what to do.” Teacher

The experience broke with traditional learning by centering upon the creative process with no end results in mind. Participants were trusted to create the material for themselves and encouraged to develop their creativity skills by being curious about their place, posing questions and using their existing knowledge to collect ideas. They specifically looked for patterns and anomalies in the landscape that drew their attention.

Participants had to reflect critically on the effectiveness and impact of their ideas, testing and refining them in practice before being carried out on site.

Due to the nature of the project certain elements were weather dependent and participants had to adapt and problem solve right to the end of the process. All of this developed the participants’ creativity skills in a clear and purposeful way.

The project was recognized as being innovative, and shortlisted as a finalist for Creativity in Schools, at the 2012 Creative Scotland Awards. It also led to one teacher gaining Professional Recognition for Creativity by the General Teaching Council of Scotland.