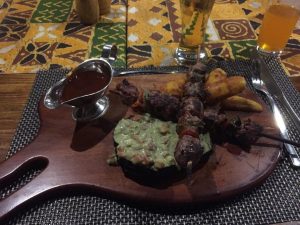 We had a lovely meal last night. The venue of choice was “The Hut”, which is very near the bee-hive-like conference centre here in Kigali. The menu was a mixture of Rwandan and Western food. I had the goat brochette – a kebab type thing which came with grilled plantain and stuffed aubergine. It was utterly delicious and I very much enjoyed the conversation round the table. It’s so nice when teacher/pupil divisions break down a bit and we can all just be a group of friends out for a meal.

After a pancake breakfast, we stopped at an ATM on the way to the first project we were visiting. I was very excited to find that…

a. The ATM displayed my name.
b. It spoke to me
c. It had a Scottish accent.

Also en-route we stopped to exchange our “Jibu” carrier of fresh water. I was delighted to see that the shop had “Jibu” branded water bottles so I bought one for use back at KHS. 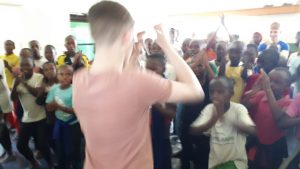 This morning we visited “Mindleaps”. This is a project which engages street kids and hard to reach families through dance. Suzie’s RE teacher from school, Jim Bell helped to set it up and the centre is named after him so this was quite a special day for her. The dancing was amazing and very quickly a bunch of us piled onto the floor and attempted to follow the moves – with some success. We found that we were present at the return of a former student of the school who had been studying at a dance school in Seattle. He was now back to pass on what he had learnt and I could see how excited everyone was to see him. His mum was standing next to me and was clearly very proud!

The centre managers toured us round and explained that not only does the centre teach dance but it also helps to bolster other areas of the curriculum in the same way that we do “study support” back home. They also engage with the families and loan them money to set up businesses and therefore bring in an income. It is a very impressive project.

Kieron stepped up to the mark in style to lead a bit of “Zumba” before w e took the opportunity to teach our new friends the “Gay Gordons” and “The Flying Scotsman”. The KHS team demonstrated first before grabbing a Rwandan partner. Once we had finished and we’re heading off we say a bunch of the kids form a set and repeat the dance. The fact that they could pick it up as quickly as this was very impressive and a testament to the hard work the school managers and teachers put in. 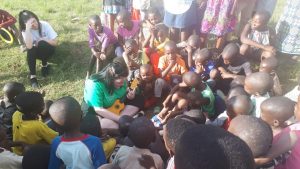 After lunch (spaghetti Bolognese), we visited one of Comfort International’s newest projects. A couple of years back, the CI staff were on a walk and found a bunch of kids on a swamp. They then founded a centre specifically for those kids and this is where we were to visit. These kids were some of the most joyous and most tactile we had met so far and within seconds we were being prodded, poked and crawled over. After introductions they had the chance to ask us questions and one gentleman (aged 14) asked me “what is a compound?”, “what is valency?” and “what is the skeleton?”. It turned out that he was a total science fiend and we made friends. He was a delightful lad and very enthusiastic about his science. 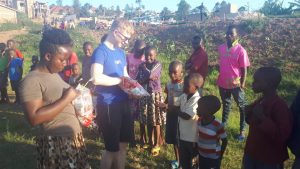 We made our way down to the pitch where we played agate and football (we discovered that I’m just as bad at football as I ever was). We also sang some songs which culminated in me leading “Singing in the Rain” and “The Music Man”.

Our job before we left was to hand out sweets. Ben commented that he’d like to give them so much more and I agreed. We have to follow the instructions of the CI leaders though as everything must be 100 % fair and equal.

Soon it was time to leave so I bid farewell to my science pal who told me “never give up”. I think that’s a great message.