We had kebabs last night – much enjoyed by everyone. 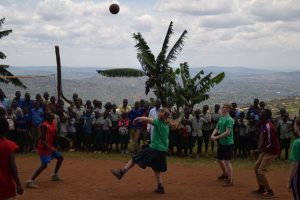 This morning on the way to Bumbogo we had a rather exciting encounter. Two moto taxis crashed into each other just as we were about to pass. As we did so we could see that there was a guy at the side of the road looking like he was in a bad way.  Now, I’m not one to walk by while others suffer and I’m also the Group fist-aider (complete with kit) so I went to assist. One driver was ok with just a couple of grazes but the other clearly had an open fracture of the lower left leg. The bone was sticking out and his foot was at a funny angle. As I was trained to do, I created a “ceiling” over the wound and bound it with a couple of folded triangular bandages. I patched up the other guy with a couple of plasters. Our driver ‘phoned for an ambulance. The ambulance arrived after about half an hour or so by which time we had quite an audience. Usually I’d try to clear the crowd but it was obvious that that would never happen no matter how hard we tried! Gillian, Hannah and Ben all helped out in various ways and were total calm and controlled legends. I was quite proud of myself as I’ve never actually had to do proper first aid before. I would never have predicted that the first time would be on a moto taxi driver at the side of the road in Rwanda! It was the right thing to do.  I reckon mind that the guy must have thought he’d reached the other side when a guy who bears a striking resemblance to traditional pictures of Jesus with a rainbow hat and a kilt was trying to fix his leg! 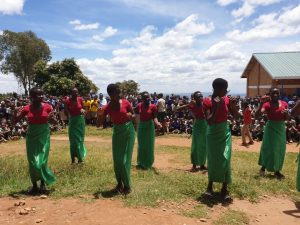 As a result of our first aid adventure we were a bit late to Bumbogo but no one minded as we’d ‘phoned ahead. First we toured round some classes. We introduced ourselves and I played some tunes and sang. In the final classroom we sat with some of the senior kids and they totally grilled is. The Rwandans still can’t understand how I can be 39 and not have a partner or a family. They were saying that here by the time a man is 25 he will be expected to prepare for marriage.
We played agati and volleyball and demonstrated that we weren’t particularly good at either. I think we gave the school (as in about 2k folk watching) some real entertainment.
Afterwards we had a whole school assembly in honour of us and the fact that we are heading home. The Bumbogo Gender Equality Group sang and danced, I sang “The Freedom Come All Ye” and “The Element Song” and Hannah sung a lovely song as well. We danced a “Flying Scotsman” before grabbing some Rwandans and doing a kind of “Orcadian Flying Scotsman” which was a huge amount of fun. 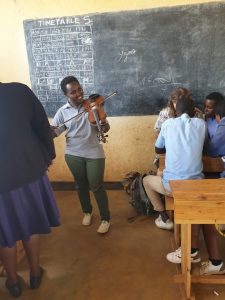 Jean gifted me, Suzie, and Gillian some wall hangings and a wallet each and each of the KHS pupils got a wallet with a Rwandan bracelet in it.
Eventually it came time to say cheerio so after some more dancing and lots of “hi-fives” we boarded the bus. On the way back to Good News we visited the local market were you could buy pretty much anything including various vegetables, spoons, nail brushes, and live chickens and rabbits. I think the KHS team were a little shocked by this but in reality the best way to keep meat fresh is to keep it alive. It was a fascinating but crazy place and I cannot think of any shop that has a more beautiful view.
11/10/2019, 7.48pm BST.  Aberdour, Fife, Scotland
In the afternoon we chilled and packed before a dinner of scotch eggs, biscuits (in the North American sense of the word) and samosas.  Our journey home itinerary was as follows… 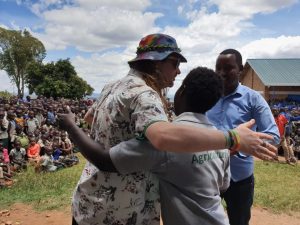 9.45am (CAT): Leave Good News Guest House, Kigali
10.15pm (CAT): Arrive Kigali Airport (KGL)
12.35am (CAT): Flight leaves Kigali Airport (KGL) – 1 h flight time
2.35am (EAT): Flight arrives Entebbe Airport (EBB)
3:30am (EAT): Flight leaves Entebbe Airport (EBB)  – 6h 20min flight time
09.50am (GMT+03:00): Flight arrives Istanbul Airport (IST)
12.35pm (GMT+03:00) – Flight leaves Istanbul Airport (IST) – 4h 15min flight time
3.35pm (BST) – Flight arrives Edinburgh Airport (EDI)
5.00pm (BST, ish) – Arrive Kirkcaldy High School (KHS)
The first flight was very odd as the plane stopped in Entebbe (Uganda) but we didn’t get off.  Instead, after a few passengers had left, the ground crew cleaned around us before more passengers got on and we headed on-wards to Istanbul.  I had coffee and a “latte cake” at IST and very much enjoyed it.  I also watched “Yesterday” on the flight and would recommend it, particularly  if you’re a Beatles fan.
For my final thoughts on my trip, you’ll need to consult the reflections post but I can safely say this trip is one that has changed us all and I know is one we’ll never forget.  I hope you have enjoyed my missives.