We had a morning off today so breakfast wasn’t until 9.30am! It was lovely to be able to linger for a bit and just chill out watching some TV and just hanging out. 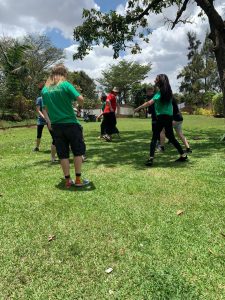 At 11.30am we practiced some Ceilidh dancing ready for our trip to Groupe Scolaire Bumbogo. We managed to perfect….

I was really proud of the group – particularly the shyer members. Everyone flung themselves into it, despite the searing heat. We felt well prepared and well exercised after. Chris, one of the staff members at the Guest House commented on how impressive it was that we all knew what we were doing. That was a great accolade since most folk didn’t! 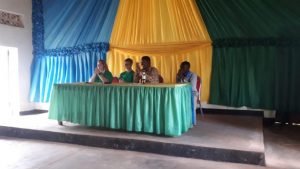 After a lunch of samosas, chips, salad and cake we headed to Bumbogo.

At the school we met Jean, the head teacher. He welcomed us to the school and showed us the Scottish flag in his office, signed by many of the KHS pupils and staff. We then went to their assembly room where we were met by the students. They gave us the most amazing welcome with drumming, singing and dancing and we got the chance to dance ourselves. I think the Bumbogo and KHS students were all amused by my crazy moves! 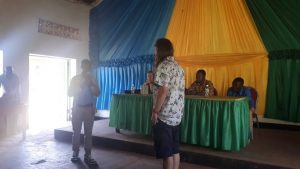 They did a kind of fashion show and and at one point Dominika became a model!  Also, Ben ended up at the top table as a KHS student representative between Suzie and Jean.  I was really impressed to see the group “stepping up to the mark”.  They did an amazing job.

Somebody made the mistake of giving me a microphone so it became a stand up shoe pretty quickly. They asked me about Scotland so I told them we had a big lake (Loch) with a monster in it. They looked quite confused. 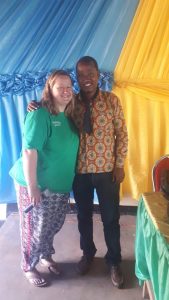 We presented Jean with a quaich and a KHS tie which he put on with some pride. We left at about 4.15pm after some chats with our new friends. I look forward very much to seeing them on Monday. They are the best kind of people and a huge amount of fun.