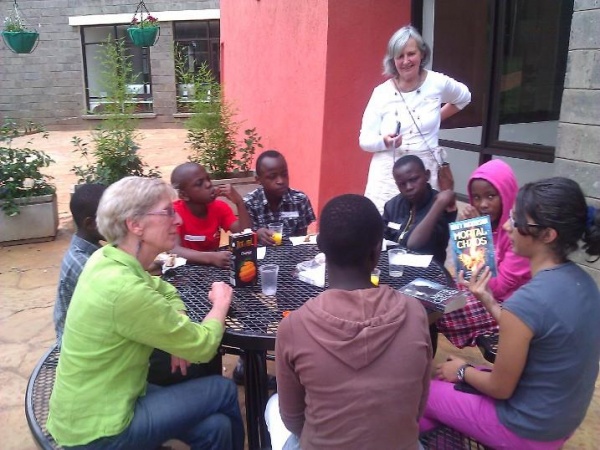 The shortlist this year was Mortal Chaos by Matt Dickinson, Torn by David Massey, Mister Creecher by Chris Priestley and Slated by Teri Terry.

This year there was an international dimension to the Book Award with young people from Nairobi (International School of Kenya and Mathare North Library) shadowing the award. It was very successful and they have renamed their book group The RED Book Club!

250 pupils from  the secondary schools in Falkirk Council participated in the Book Award reading, enjoying and debating the shortlisted books. Along with the Kenyan young people, they voted in December for their favourite book and planned a creative interpretation of one of the books to be performed at the award ceremony.

The Award ceremony had a wonderful atmosphere thanks to the energy and enthusiasm of the young people. The performances showcased the creativity and  confidence of the young people. We particularly enjoyed the performances from Nairobi sent to us electronically. At the ceremony the radio broadcast team from St Mungo’s High School recorded interviews, pupil journalists from Graeme and Larbert High Schools wrote a news report which will appear in The Falkirk Council News, a film team from Braes High School filmed the event and a pupil from Falkirk High School, interested in photography, shadowed the council photographer.

Feedback from the some of the authors:

“Thank you so much for everything this week. I had the best time at the RED book awards. I think having the colour red as part of things added such a fun element to the day. I really enjoyed myself, and was amazed at how good the presentations by the schools were. ” Teri Terry

“Could I just say a big thank you, on behalf of David and myself, for the hospitality shown to us during our time in Falkirk. We enjoyed our visit to Scotland so much and are looking forward to returning when we have more time. Some of our favourite moments were seeing the children act out parts of the shortlisted books – especially Torn of course!” David Massey 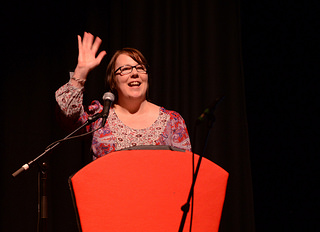 And the winner of RED 8 is Slated by Teri Terry 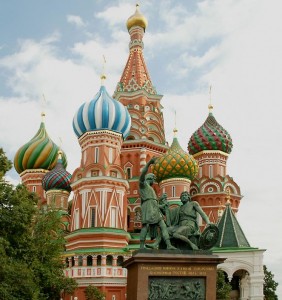 In November 2012, Library Support for Schools hosted a visit from Directors of children and young people’s library services in Russia where they were particularly interested in Falkirk Council’s RED Book Award and storytelling initiatives. This visit prompted  Andrey V. Lisitsky, Head of the Training Centre “School of Librarian Leadership”, Pushkin Library Foundation, to arrange a Skype meeting with Yvonne. After Yvonne talked to the group about the RED Book Award and storytelling projects there was an opportunity for questions. They were particularly interested in ideas to engage young people in reading for enjoyment and oral storytelling.