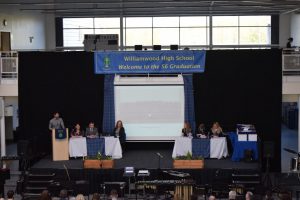 On Thursday 26 April, Williamwood held its annual Graduation Ceremony for the S6 class of 2018. The evening began with Connor (S4) piping in the graduates.  There was then an introduction from Mr Inglis (headteacher) and a motivational speech by Andy Carr.  Andy is an ex- pupil of Williamwood High School who is a part of the band GUN.  GUN are the only Scottish band to win an MTV European Music Award as well as travelling extensively around Europe and the U.K.  Andy also has a passion for fitness and sports, working at the “Shed Bootcamp” as well as running a small personal training group.  . Musical interludes were provided throughout the evening by Brittany , Erin and Morven ; Eilidh , Christopher and Campbell as well as the S6 Advanced Higher Group.  The evening concluded with valedictory speeches from Head Boy and Head Girl, Eilidh and Christopher , the S6 depute headteacher, Mrs Raeburn and a vote of thanks from Bronagh .  This year’s S6 video is based on High School Musical and stars the S6 class of 2018 as well as various staff members and finished the evening in a entertaining and emotional way. Congratulations to all of the S6 pupils graduating. The evening was well attended by over 900 people. Special thanks to Andy Carr for his attendance and inspirational words and the PTA who generously funded the hospitality at the end of the evening.  This year’s video can be viewed here.
A copy of the programme can be viewed here.  More photos can be viewed here.