A Fairtrade Group was set up by Mrs Boyom and the members are: Mrs Boyom (Coordinator), Mrs Clare Rogerson (Parent), Mrs A MacCormack (Dinner Lady/Janitor/Cleaner) and Tamara, Youcef, Rosie Mai, Amy and Dylan.
We are working through the 5 Goals to become a Fairtrade School. These involve making up a school policy on Fairtrade, teaching and learning about Fairtrade and using/promoting Fairtrade products in the school and local environment.

A Fairtrade Assembly was held to tell everybody what Fairtrade is and what is stands for – P1-4 spread the message well in a PowerPoint presentation.

A Fairtrade Day was held in March where we invited a Traidcraft speaker to tell us about Traidcraft products. We also played a giant Fairtrade Snakes and Ladders game, held a Who Wants to be a Millionaire quiz, made Fairtrade posters and used plastic bottle tops to lay out the Fairtrade logo design. Pupils entered a ‘Decorated Fruit/Veg character’ competition and in the afternoon we all enjoyed fruit kebabs using Fairtrade fruit kindly donated from Tesco supermarket. Each pupil received a Fairtrade banana to take home along with some Fairtrade Fortnight leaflets. We all learned lots about Fairtrade and had a lot of fun too!

TESCO SUPERMARKET VISIT – P1-4 visited the store to find out about jobs people do and especially what Fairtrade products are sold there. We found out that there is a lot of Fairtrade fruit and veg and also cereal bars, biscuits, dried fruit snacks and baking ingredients which have the Fairtrade logo on the packets. We got to taste some of these foods – yum, yum!!!

DECORATED FAIRTRADE T SHIRT COMPETITION – in school we held a competition for all pupils to design a Fairtrade T Shirt. They were all brilliant and 4 winners were chosen. The winning entries were sent off to Tesco to display in their store. 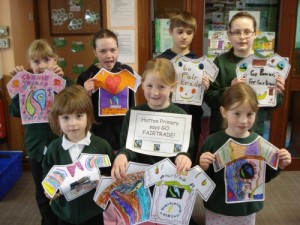 Malawi Rice was sold to community members by our Hutton Helping Hands P1-4 Enterprise group. We had 30Kg to sell in order to help send a child in Malawi to school. Not only did we achieve this but we also helped Applegarth School to sell some of their rice too. Thank you to everyone who bought rice from us. The project will possibly be repeated next year.

A Fairtrade Football Match was held at Lockerbie Academy and was attended by Hutton P4-7 pupils in June. They enjoyed the chance to try out their skills against the other teams and were pleased to be playing with a Fairtrade football. Next school year we hope to save some money in order to purchase our own Fairtrade football.