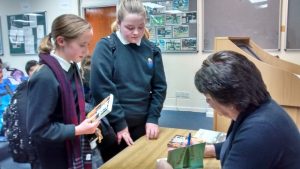 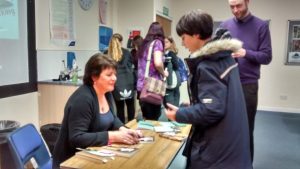 The author, Linda Strachan visited the school for a session with three of the S1 classes. Linda writes for all ages (she is responsible for the Hamish McHaggis series) but it was her gritty teen titles – Spider, Dead boy talking and Don’t judge me –  that she  was here to talk about. She told us how she got inspiration, how she researched her ideas and also read extracts from her books which had us all intrigued. It was obvious that the pupils enjoyed  the visit. Quite a few purchased one of her books on the day and library copies are still in great demand. Here is some of the feedback we received:

“Interesting – especially finding out about how an author gets inspiration or research. I also liked that the books had a “message” behind the story eg Don’t Judge Me is about trust and judging someone from what you see and know”

“Linda was very inspirational for all the pupils here. Her books look so detailed, fun and lots more”

“I think she was awesome. I loved how she said every word with emotion”

“I thought it was wonderful! I loved listening to the author talk about her books”

“I loved it and the books are awesome! Helped me with my writing”

“It was very interesting and nice meeting and finding out about Linda Strachan and her books. It would be nice to do this more often”

“She has made me start reading again” 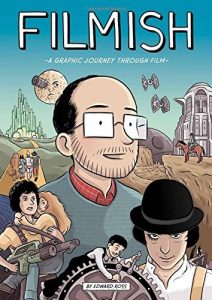 The graphic novelist Edward Ross  came to the school to give a workshop to three S1 classes. Edward is the author and artist behind Filmish : a graphic journey through film and is passionate  about comics. He discussed his work and gave pupils tips about creating comic book characters. Pupils then had the chance to design their own comic. The feedback we received following the visit was very positive. Here are some of the comments:

“I love comics. It was amazing”

“I thought the visit was innovative, exciting, interesting” 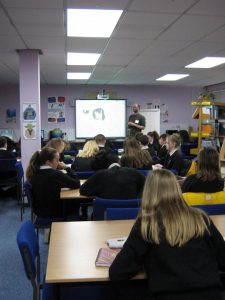 An S2 class has been participating in the Grampian Children’s Book Award scheme; reading the shortlist voting for their favourite title and entering the review and poster competitions. The class attended the GCBA ceremony at Aberdeen University on the 10th May where they heard three of the shortlisted authors talk about their books. It was a very enjoyable afternoon made even better when we learnt that a Bridge of Don pupil had won first prize in the review competition.  Well done Lea! 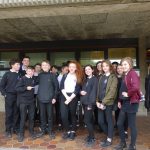 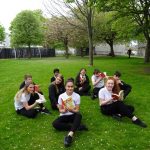 James Clammer – “Thanks so much for inviting me. Great organisers, wonderful kids, fantastic day!”

Lisa Williamson – “Thanks for having us! It was a really fun day!”

Alan Gibbons- “It was great fun”

“The talk was great and the jokes hilarious”

“I enjoyed it because we got to meet an author”

These were some of the comments we received after Dave Cousins, the award winning author,  paid a return visit to the school. He told us all about his books and how he got his inspiration for stories and proved just as popular with the current S1 as he had been with the pupils of the previous year. 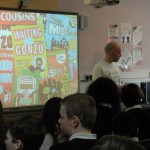 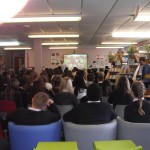 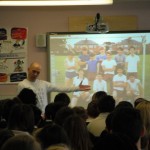 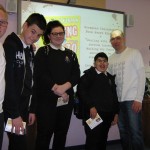 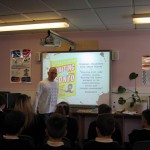 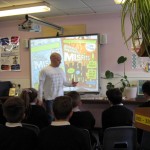 The CILIP Carnegie and Kate Greenaway Medals are the oldest and most prestigious children’s book awards in the UK, with the first winners announced in 1936 and 1956 respectively. The titles on the shortlists are contenders for the highest accolades in children’s literature, with previous winners including legendary talents such as Arthur Ransome, C.S Lewis and Mary Norton for the CILIP Carnegie Medal and illustrators Quentin Blake, Shirley Hughes and Raymond Briggs for the CILIP Kate Greenaway Medal.

All books are available from the library. 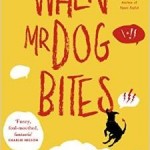 Apple and Rain by Sarah Crossan 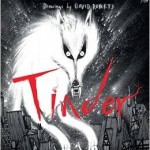 The Fastest Boy in the World by Elizabeth Laird 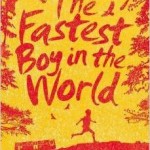 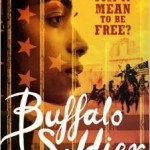 The Middle of Nowhere by Geraldine McCaughrean 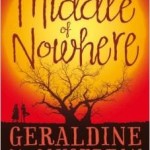 More Than This by Patrick Ness

Challenging themes including war, sickness and adversity, run through both shortlists. Gothic fantasy Tinder begins with its central character, young soldier Otto, narrowly giving Death the slip, while More Than This starts with the drowning of its hero, a boy named Seth. Elsewhere in the Carnegie shortlist, Dylan, the Tourette’s sufferer of When Mr Dog Bites, believes he faces death in the not-too distant future, and the titular Buffalo Soldier of Tanya Landman’s novel, an ex-slave now serving in the post-Civil War US army, feels Death is “so close you can smell his breath.” The devastation of World War One looms large in Frances Hardinge’s Cuckoo Song, whilst Geraldine McCaughrean’s The Middle of Nowhere begins with a child losing her mother to a snake bite in the Australian Outback. Sarah Crossan’s Apple and Rain sees a young girl called Apple delighted to be reunited with her estranged mother until she meets Rain, the half-sister she didn’t know she had. Finally, Elizabeth Laird’s The Fastest Boy in the World sees the eleven-year-old Solomon facing a marathon run to seek help for his beloved grandfather.

On 4 & 5 March from 6–8pm WBD TeenFest will bring amazing authors including Holly Smale, Marcus Sedgwick, Malorie Blackman and Derek Landy straight to your screen! With Hangouts and interviews, how-tos, blogposts, playlists, prizes and much more, each night will be packed with brilliant booky stuff as well as the chance to chat with other readers and writers.

Hang out with your favourite YA authors 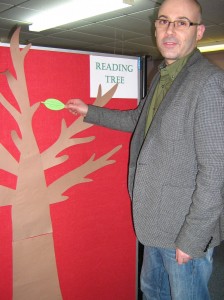 The author Keith Gray visited the school on Monday 23rd of February to speak to S3 pupils. He proved very popular, entertaining us with  tales on how he became an author, talking about his books and methods of working and leaving us with an intriguing question as to which of his stories were actually true!

Beforehand, Keith came down to the Library to launch our World Book Day reading tree. The idea behind the tree  is for pupils and staff to add a leaf with the author and title of a book they have really enjoyed. Keith’s leaf contained details of a book that had ignited his love of reading – The Machine Gunners by Robert Westall. 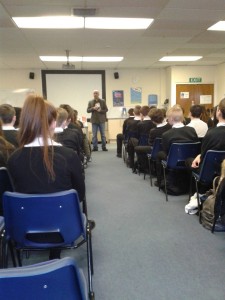 S3 pupils were invited to Cults Academy to attend a talk with the award winning author and Children’s Laureate Malorie Blackman. Malorie is one of the most prolific writers for teenagers and children. She has written around 60 books including the Noughts and Crosses series and her latest  Noble Conflict. She talked about  these titles ( and also earlier books) showing us book trailers and exerts from television shows and giving us an insight into how she came up with her ideas. At the end of the session pupils were able to ask questions and then get books signed 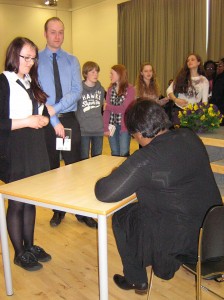 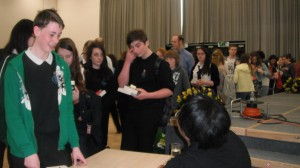 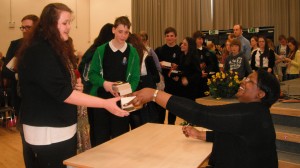 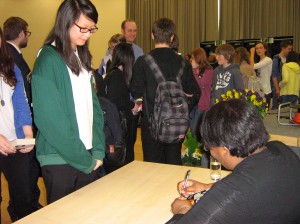 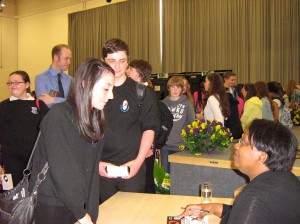 The amazing Dave Cousins visited BODA on 14 May and all S1 pupils got the chance to hear him talk about his books and how he became a writer. It took him 7 years to get his first book, 15 days Without a Head, published. His second book Waiting  for Gonzo has just won the 2014 Grampian Children’s Book Award. Miss Taylor’s S2 class were at the Award Cermony and saw Dave being presented with his prize.

For more information on Dave Cousins have a look at his website at www.davecousins.net

If you would like to listen to the Waiting for Gonzo soundtrack and watch the videos, click on www.youtube.com/user/DaveCousinsAuthor 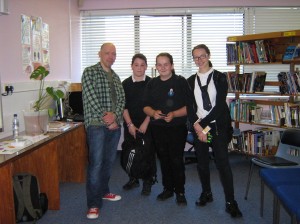 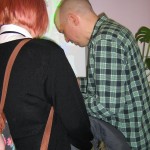 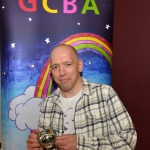 We are delighted that Malorie Blackman, bestselling author of the award-winning Noughts and Crosses series, has been announced as the Waterstones Children’s Laureate for 2013 – 2015. She takes over from Julia Donaldson and was presented with her medal at a ceremony at King’s Place in central London this morning.

As well as being a highly acclaimed author, Malorie is a huge supporter of libraries and literacy, and is one of our author ambassadors who are helping us celebrate our 20th anniversary this year. She also appeared at the Hay Festival last week in a debate about challenging themes in young adult fiction, chaired by our Director, Jonathan Douglas. Her powerful new thriller, Noble Conflict, has just been published.