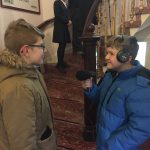 Dunoon Primary P6 have been very busy working on a project funded by the Burgh hall. It’s called Stories, Stones and bones and we have been researching the local history of Dunoon, with help from Margaret Hubbard. The pupils came up with the idea of making a film about the town called ‘Dunoon History Hunters’. 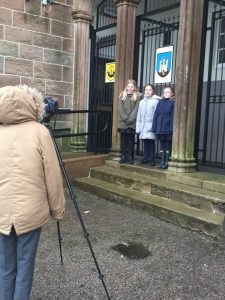 They researched the history of local landmarks and buildings including Dunoon pier, Dunoon Castle and the Castle house museum, The Pavillion and Queen’s hall, Highland Mary, the old fever hospital, the Burgh hall and the former Queens hotel in Kirn. They have also reported on the history of our school and famous people from Dunoon, including Harry Lauder, Sylvester McCoy and more.

Two pupils have also broached the current controversy surrounding Jim Crow. They are now working with film maker Alasdair Satchel to film their reports in these locations and are very excited to see their finished film.