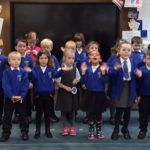 Well done to the P1 class of Kirn Primary School for winning second place in the National French drama competition.

Every year, the French Institute of Scotland organises ‘le concours de la francophonie’: a national French drama competition for learners across Scotland. This competition is designed to value creativity in French and allow a large participation of all primary and secondary schools. Learners are invited to film a short piece, dialogue, song, or play in French. The competition is organised in two phases: local authorities choose their local champions and then a national jury selects the winners.