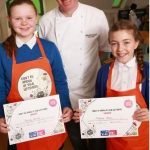 Taynuilt Primary School among winning schools from across Scotland who prove they aren’t afraid of fighting against food waste. This Halloween Taynuilt Primary School were successful in a competition between Love Food Hate Waste Scottish Business in the Community and Good Family Food (Quality Meat Scotland) who teamed up to give schools across Scotland the chance to prove their mettle in a recipe competition called ‘Don’t be afraid of your leftovers.’

The Food for Thought funded schools were tasked with developing a recipe that used leftover ingredients in a creative way, had a hint of Halloween about it, and would work in practice. After a first round of judging, final judging took place at the Edinburgh School of Food and Wine 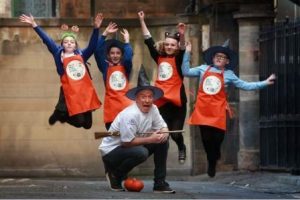 Maisie Shaw and Aisling Duncan from Taynuilt Primary School were selected as one of only 4 winners from across Scotland for their innovative recipe Scabby Fruit Crumble. The judges were particularly impressed with the thought both girls had given to why it is important to save food from the bin and the care they had shown to understanding the issues raised.

The recipe is now available on the Love Food Hate Waste website – the inclusion of caramel waffle biscuits adds a tasty extra crunch to this crumble! 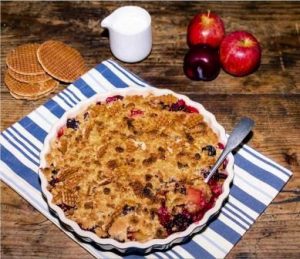 Maisie and Aisling were invited to a celebrations event in Edinburgh where top chef Paul Wedgwood of Wedgwood the Restaurant gave a cooking demonstration and presented the winners with their certificates and specially made aprons. Other activities included a bike powered smoothie and even eating bugs like crickets and meal worms. 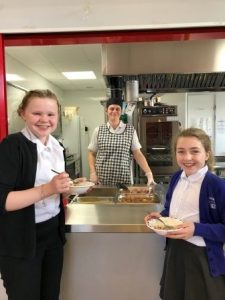 Well done to Aisling and Maisie! Would you give their recipe a go?