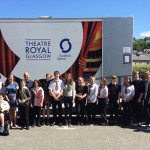 S4 pupils who are studying national 5 music at Oban High had the opportunity to visit a pop up opera performance of Mozart’s Figaro on Wednesday. A shortened version of Figaro was performed by Scottish Opera in a converted articulated lorry which became a theatre on wheels with a stage, a chandelier and even the original carpet from the Theatre Royal in Glasgow. The lorry, which parked at the Corran Halls, was painted inside to look like the interior of the Theatre Royal and the audience of 22 were seated on stools with the singers, in full costume, performing amongst them.
The pupils had never been to an opera before and had the unique experience of listening to top class singers up close. The cast and musicians held a very informal Q & A session afterwards before moving on to Bute where pupils from Rothesay Joint Campus were also paying a visit.