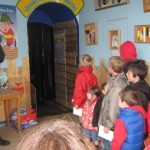 As part of their topic about the sea, Lismore Primary School children spent a very enjoyable day at the Oban Sea Life Centre last week.  The two Pre Five children also joined them for the day. The children began their visit with a tour through the various aquaria with aquarist, Innes. They saw all sorts of water animals which live around the local shores including sea urchins, starfish, lobsters and jellyfish.

A large pool contained many different species of flat fish which were well camouflaged on the sandy bottom. There were also cod and coley in the pool and the children were able to get up very close to them!  A rather large conger eel caused great excitement as did a number of different sharks and a very active octopus.

The children then met some weird and wonderful sea creatures from warmer waters – the brightly coloured sea apple, the striking zebra eel, horseshoe crabs and some ghost fish which were actually transparent! Moving on, there were some sea horses and cow fish and finally, a turtle sanctuary where a selection of these water based reptiles were recovering, having been rescued from ponds, rivers and even suitcases. 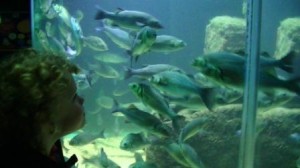 It was then time to meet Isla and Lewis, the centre’s two otters. The children watched them being fed before observing them under the water as they ducked and dived. Laura the seal was also introduced to the children and she demonstrated a few tricks with her trainer.  She looked very sleek as she slithered in and out of the water and swam around her pool.  The children really enjoyed their day out and returned to school keen to write a newspaper article about their day out.  They are also making a Top Trumps game involving the animals they saw and are creating a quiz about sea animals to test their parents and guests at the school’s Open Evening on October 3rd. 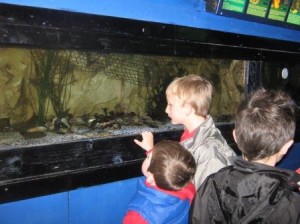 The Sea Life Centre could not have been more helpful in accommodating us for lunch, explaining the plan for the day and even providing us with goody bags – a well worthwhile trip for any class!