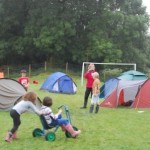 Friday 7th September was Camping Day at Lismore Primary School.  Following the disappointing cancellation of last term’s planned camp due to high winds, everyone was determined that  this one would go ahead – even if there was a little rain!  The children arrived at school with tents and sleeping bags.  Some were a little apprehensive as this would be their first night away from home or in a tent.

During the morning, the children learned a bit about survival skills, finding out about equipment they would need to survive in the wild for the night, and what to do if they were lost or injured in the wild.  They then pitched their tents and made a fireplace before going home.

At 6 o’clock that evening, enthusiastic children, together with their parents returned for a family barbecue after which the children would camp whilst the parents went home to their warm dry beds.  Despite the Scottish drizzle, parents Pete and John expertly cooked burgers and sausages for everyone and the children enjoyed taking part in a Scavenger Hunt. 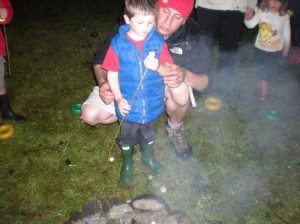 As it began to get dark, the children helped to light a fire with dry wood they had collected a few weeks before.  They cooked marshmallows and in true campfire fashion ate them melted between two chocolate biscuits!  Armed with torches the children then set off for a spooky walk.  As they tiptoed along the path, they were delighted to find an abundance of toads enjoying the dark and the puddles as well.  By the time they returned to school, most parents had left apart for one or two stalwarts who had volunteered to stay overnight and help with supervision.  There was then hot chocolate all round with more marshmallows and great excitement as the children began to prepare for their night under canvas.

As the rain began to fall more steadily, the children wriggled into pyjamas and sleeping bags.  They lay quietly chatting in their tents listening to the patter of the rain until they at last fell asleep. 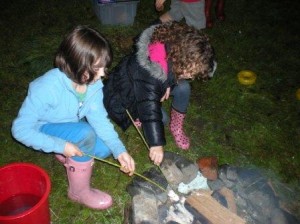 There were one or two very early risers the next morning but the rain had stopped as everyone gathered for a bacon butty breakfast cooked by Hazel.  Sleeping bags were packed away and the tired but happy campers were collected by eager parents who took them home no doubt to catch up on their sleep.  Many thanks to Pete and John for their barbecue skills and to Robbie and Hazel for being enthusiastic campers along with the children! 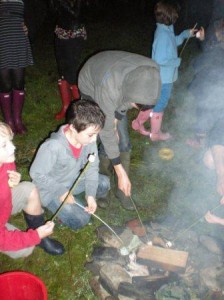 1 thought on “Intrepid campers on Lismore!”