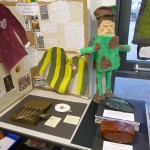 Lochgilphead Primary 5’s have been learning about life in 1914 and the First World War. They planned to turn their classroom into a museum for a day, but due to its success, it remained open for a second day! In the collection, there was some amazing memorabilia from home, alongside wonderful models made by the children. There was even a World War I trench dugout complete with bed and cooking stove. During the topic the pupils were learning to ask good questions, make notes and use their notes to create all the information panels for the museum. They also found time to try some skills from schools 100 years ago such as woodwork, handwriting with ink and sewing.
On the two days of the museum the children were able to show off their extensive knowledge to parents, grandparents and other pupils in the school. This was also an opportunity for pupils to think about producing high quality work and be more independent learners. P5 pupil and Museum Curator, Christopher McCartan, said ‘It’s been a great success. Everything that people brought in has had a good spot in the museum.’ 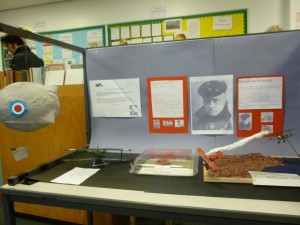 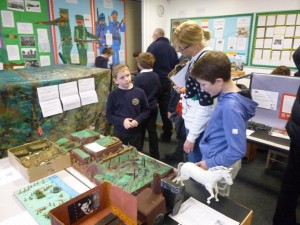