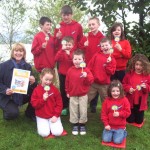 Lismore Primary School children were delighted to hear that they have been awarded first place in the National Fairtrade Snack Attack Competition 2014. Schools from all over the United Kingdom and further afield competed to design a fun Fairtrade snack, together with its packaging, a marketing campaign and a report about their activities. Led by Classroom Assistant, Hazel MacCormick, the Lismore children worked together as a company, brainstorming and presenting ideas before splitting into groups to take on the different responsibilities of graphic design, marketing and logistics.
The final product was a rainbow lolly made with fair trade fruits. The children named it a “rainbow pop” and produced a fun film advertisement for the product with the slogan “What will you find at the end of your rainbow?” They made a scrapbook about the design process, detailing their ideas and what they had learnt during the project. The judges were particularly impressed with the mock up model of the lolly and the scrapbook. Together with a certificate, the children have won £100 worth of Fairtrade products. They are now deciding how best to use this exciting prize to help them on their journey to achieving Fairtrade School status.