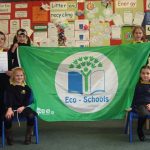 Achaleven Primary School pupils and staff were very proud to receive their 5th Green Flag from Eco-Schools Scotland last week. This follows an assessment at the end of January where Eco-Schools assessor Paula Love commended them on their collaborative approach by working with local environmental organisations including The Grab Trust and AliEnergy, and for the work done in the community by involvement in recycling, village litter picks, charity fundraising and promotion of Fairtrade.


The award is normally worked on over two years but due to the school being closed in 2011-2012 the pupils only had one year to get the work done. As they were all P1 at the time this is an even more impressive achievement. Paula was delighted with the progressions made in the school garden since her last visit, including the addition of the orchard, and looks forward to seeing what will develop in the next few years. She remarked that “your children are truly responsible, global citizens”.

1 thought on “Achaleven Goes Green for the 5th Time”