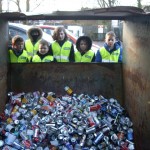 Sandbank Primary’s Eco-Committee requested a visit to their local waste handling facilities and were kindly given a tour of both facilities by Shanks Waste Disposal Company. They began by looking at the recycling facilities at Bogleha, where they saw the containers for electrical goods, metal, wood, paint, batteries, plastic bottles, soil and many more items. They heard that many items, such as electrical goods, go to Perth where they are broken down and precious metals from circuit boards are taken out.

Some items, such as wood, are taken to Glasgow but the tetrapak cartons need to go much further afield to Sweden as there is nowhere in Britain that can recycle them yet. Dangerous materials, such as asbestos, are bagged up and kept in a locked container to prevent them being a health hazard. After a very informative tour and learning what we, as a school, can be doing to conserve our planet’s natural materials, the eco-committee were escorted to the landfill site at Dalinlongart. It was a bit smelly but very interesting. We saw some huge machinery sorting out the contents of our bin bags. We saw some of the waste being converted to compost. There was a lot of steam coming off it as it heats up to over 60 degrees Celsius at least 6 times before it is ready for sieving and screening. The rest of the waste needs to be put into pits and pipes are put in to siphon off the gas produced as it decomposes. Then the pit is capped which means a load of soil is placed on top, so that it looks like a small hill and the gas is burned off via a tall chimney. We would like to thank Mr Wheeler and his team for taking the time to explain things to us and we all agree that we need to think about what we are putting into our wheelie bins and to make the effort to recycle as much as possible. 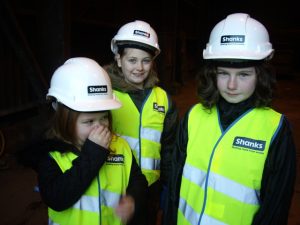 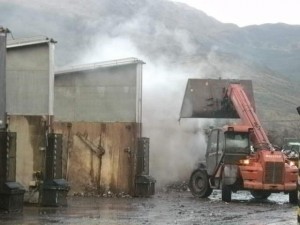 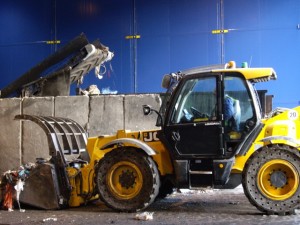