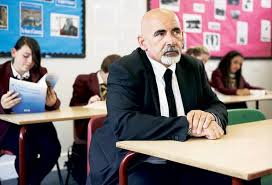 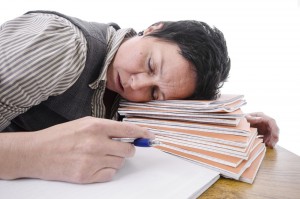 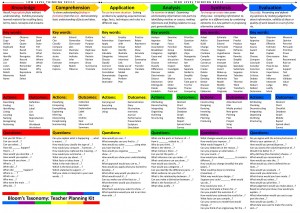 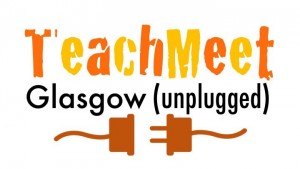 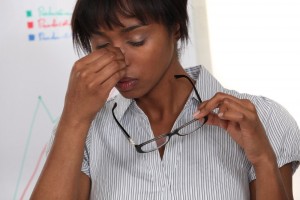 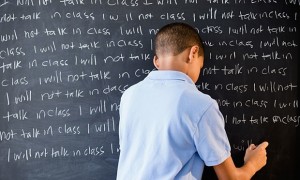 Got a difiicult class? 32 tips on behaviour management in the classroom.

Education Scotland is hosting an exciting event in collaboration with Edinburgh Genomics – giving practitioners a chance to converse with some of Scotland’s leading experts in modern genomics research. Edinburgh Genomics is embedded in the rich academic environment of the University of Edinburgh, offering genomic sequencing and bioinformatics services across the fields of medical, veterinary and biological sciences. This twilight session has been organised in accordance with the specifications of the DNA and the Genome unit of the CfE Higher (H4KD 76). The session will be hosted by Karim Gharbi, Head of Genomics, who will explain the concepts of sequencing and bioinformatics; describing the cutting-edge technologies used at Edinburgh Genomics in this highly powerful and ever-developing field of scientific research. This will be immediately followed by a second discussion hosted by Mark Blaxter, Director of the Genome Science Division, who will discuss the many applications for genomic sequencing, such as phylogenomics, comparative genomics and possible clinical applications.

Join us on Monday 16th November at 4pm in Glow TV to find out more. Sign up and regsiter now –Edinburgh Genomics

Join us on Thursday 19th November at 4pm for this event which will offer practitioners teaching both Higher Environmental Science and Higher Biology the chance to converse with Professor Pete Smith from the University of Aberdeen on this critical sustainability issue.

Professor Smith is the theme leader of ‘Environment and Food Security’ at the University of Aberdeen, as well as the Director of Food Systems of the Scottish Food Security Alliance-Crops (www.sfsa-crops.org). He has contributed a great deal to environment and food security research and this event provides practitioners an excellent opportunity to discuss this critical issue with an academic leader in the field.

This event has been organised in accordance with the mandatory key areas of both the Higher Environmental Science and Higher Biology Sustainability units.

This is one of a series of thought pieces from the Literacy and English team at Education Scotland.  In this one, Helen Fairlie discusses some well-known research about reading for pleasure from the National Literacy Trust.

The lead up to Book Week Scotland seems like a good time to consider how we motivate learners to read independently for their own enjoyment.  An equally important question for me, though, is why does the amount that we read for enjoyment make such a big difference to our learning?

This paper was published by the National Literacy Trust in 2006, however the research that it refers to still tells us a lot about the difference that reading for pleasure makes to our progress in literacy, as well as revealing a lot about how motivation to read works. 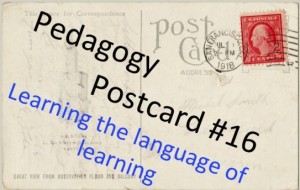 This post is about the need to give students the basic  vocabulary and linguistic tools to communicate about the concepts  and skills they are dealing with in each subject.  I’ve seen excellent practice in my school where teachers take time to teach the language of learning in the subject, in parallel with teaching the subject itself.  Very often students appear to be struggling with a concept when, actually, they are just struggling to find the right language to express their understanding.  Here are a few examples.

In science, a recurring issue is with describing relationships between variables that are captured on a graph. 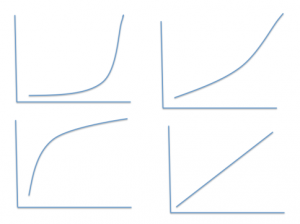 A simple question about the relationships shown will often yield the obvious response:  ‘it goes up’.  A better answer might suggest that as one variable increases, the other variable also increases.  But even if students can see that the shapes are different and have an intuitive sense of what that means, it’s not so easy to put into words.  It is important to invest time in giving students the language to use:

Associated with this is the language of change and of scale.  Students often find it easy to say things are ‘different’ or ‘change’ without stating something more precise.  Instead of ‘the temperature changes’ or ‘it gets hotter’ they could be saying ‘the temperature increases’.  Instead of ‘it goes faster’, they could be saying ‘there is an increase in velocity’.  Rather than suggesting that ‘the beakers have different sizes’ they could say ‘this first beaker has a much larger volume than the second beaker’.  I find that even very strong students can be reluctant to go for the more formal expressions; they feel inhibited even if they know the terminology.  The use of precise, formal language like this needs to be modelled continually; normalised by the teacher so that students feel comfortable using it and do so spontaneously.   A simple request for students to re-phrase their responses can be very effective – and much better than accepting and praising the more basic responses and moving on.

In Languages lessons at KEGS, the teacher will often use the target language for the entire lesson – or at least 90% of it. This requires students to learn to understand the basic instructions for activities in the target language:

Besprechen Sie die Antworten mit Ihrem Partner und entscheiden, welche wahr und welche falsch sind.. (Discuss the answers with your partner and decide which are true and which are false ..)

Several teachers at KEGS have introduced these table mats that give students all the phrases they need to engage in the lesson using the target language.  I’ve seen them in action and they have a superb effect: 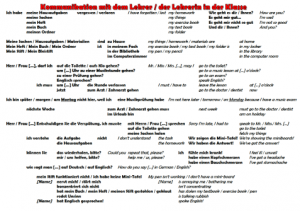 At a basic level, if students gain confidence with phrases like “comment dit-on” instead of “how do you say” then they can engage even when they’re stuck.  Teaching these practical phrases is a precursor to learning the language of grammar where cases and tenses are altogether more complicated.   A balance is needed.  I tried to learn Russian once but was crushed under the weight of the variants for nominative, dative and accusative cases. It felt as though nothing I said was ever correct.   The problem was that I didn’t really know what those things meant in English, never mind in Russian.  It obviously pays to invest in teaching the vocabulary of grammar for many reasons – not just to get to grips with learning a new language.

In history, I’ve seen a superb lesson recently where Year 7 students were learning about the difference between ‘narrative’ and ‘analysis’ in relation to their writing about historical events.  They’d produced an extended piece of writing about King John and, after swapping work with a partner, were using different coloured pens to highlight the narrative and analytical components.  There were excellent discussions about the different language used in ‘telling the story’ as opposed to explaining cause and effect between events or evaluating the relative significance of different events.   Later in their history curriculum, students talk about narrative and analysis with confidence; they know that the narrative should be kept to a minimum in an analytical essay.    But it doesn’t happen by accident; they are taught to understand the terms explicitly.

In subjects such as Graphics and Art students need to learn a vocabulary that allows them to express intuitive ideas more explicitly. In Art, there is the vocabulary of line, form, tone, composition, texture and so on and this is usually taught throughout the course.  But that’s not always the case. For example, a GCSE Graphics question may ask students to evaluate various logos and to articulate which is the most effective.  I saw a lesson where students were struggling to get beyond ‘this one’s kinda cool but the other one is boring and more serious’.  The teacher realised that they needed to work harder on developing subject-specific vocabulary and they spent some time on the language instead of the actual design work.

In RE students are often asked to compare different perspectives.  In common with debates in general, they are often drawn towards opposing poles, however subtle the issues are!  These people are FOR; they people are AGAINST.   In doing this, it is helpful for them to have a number of different ways to describe different schools of thought appropriate to the issue in hand.  This could be Liberal vs Traditionalist; moderate vs fundamentalist; Protestant vs Catholic; contemporary vs orthodox; official vs personal – and so on.   All too often students get stuck in a pattern, believing that there are two camps in every debate so it helps to give them multiple ways to express alternative perspectives.   It is often safer simply to say ‘some Muslims believe that …..is acceptable whereas most others believe that it isn’t except in special circumstances’.  The ‘some’ or ‘most’ here are better than ‘all Muslims believe that…’ which is rarely true.

Finally, linking from RE to debates in general, I find that a very common area to develop is giving students the tools to express the nuances of any comparative analysis.  All too often they reduce things to black vs white; on vs off; all vs nothing.  For example in biology they may be talking about food chains:  The rabbits run out of food and die OR the Foxes take over until they’ve eaten all the rabbits  – and so on.  Students need to learn to talk about relative changes in population size and the language needed to convey that idea:  if the rabbits’ food supply reduces due to bad weather, then fewer rabbits will survive and the population will decrease.   This in turn will have an impact by reducing the population of foxes unless they can find alternative sources of food.

The same is true with something like comparing power stations.  It’s common for students to want heroes and villains:  wind power is a goodie; coal is a baddie.  It requires explicit modelling to get students to recognise that, say, both nuclear and coal have major advantage and major disadvantages:  Although the energy output from nuclear power stations is around a million times greater per kg of fuel, and there are no greenhouse gas emissions, the set-up costs and risks from storing radioactive waste are significant and arguably pose a greater long-term threat than the dangers of running a coal-fired power station.   Here the use of language to convey relative positions will be more difficult than understanding the science for some students.

I sometimes use the football team analogy as I have done in this post about essay writing. We don’t need to say that City is a good team and United is a bad team.  They are both excellent teams.  However, if we need to work out which one is better, we need to find the right language. It might go something like this:   United’s defence has been more consistent whereas City has had some games where they’ve conceded far too many goals; in attack, United have several individual stars who make an impact but City plays better as a team and have ended up scoring more goals.  Overall, City’s superior attack has been more important than their inferior defence, so, on balance, they have been the better team.

To wrap-up, in teaching our subjects, we need to identify areas where teaching students the most appropriate language to use needs to take centre stage. To quote from literacy legend Geoff Barton, we need to ‘make the implicit explicit’. Subject specific literacy is something we’re all responsible for and it’s very often the key to learning the subjects themselves.