P4, P5, P6 and P7 went to Midyell to join their upper primary class for the Scottish Ballet workshop. Once we got there we saw a little bit of the show they were performing, called Highland Fling, by a member of the Scottish Ballet called Kira,and she was dancing the part of a selkie (a creature that can change in to anything it wants). We got warmed up by making a big circle and then one of the members chose one of us to start. The starting person ran to someone and then high-tens them, then that person goes and runs to a different person and,doing the same they swap places and so on. Then when we got it, we add in another person so you have always  have to keep your eyes open and on the look out. After that we added things like jumping, spinning and rolling in the middle,and at the end we did all three. Afterwards we got split into five groups of five and we had to work out three separate shapes that reassembled snow-flakes then show them to the rest of the groups and afterwards we had to make a snow-flake shape using each other’s weight to stay in balance then we had to move from one of our shapes to the next using rolls, leaps, jumps and spins and once we worked it out then we practised because we were going to show it to the other groups again later. 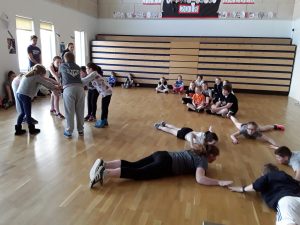