We had learned about Hinduism. We made our own gods. Me, Phoebe, Emer and Alice did Vishnu. We looked at research about Vishnu. Me, Emer, Alice coloured Vishnu blue and Phoebe did Vishnu’s Jewellery and Golden Dress. We also did the story of Rama and Sita. We put together the story in the right order. We had to decide what we were going to do. We made a puppet show. We made puppets. I made Rama and the king. Sonia made the script for the Puppet show. Then Rosie filmed the Puppet show. 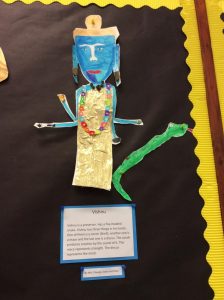