Yesterday we went to the Museum to see the James Robertson Exhibition. We looked at the different tools that James Robertson used for his map making. He used a tool called a Tee square it looks like a T and he has a tool called a Parallel rule. Then he made three maps of Jamaica. One of the maps of Jamaica was the whole of Jamaica. He used six pieces of paper to make it. They were so big and we had to get a magnifying to see the words. There were a big map of Aberdeen and there was over two thousand mistakes on it. There was lots of old paper pictures to show  the two thousand mistakes he had made. 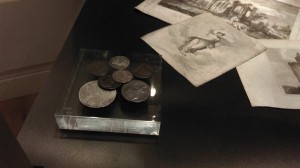