Before the summer holidays we wanted to have a den outside. So when it was a nice day we got out the blue tarpaulin and then instead of making a den we played with it. We played with it so it was a parachute we held it up and people ran under.  If there was only a few people at one side then other people had to run to that side otherwise the parachute would blow away. when we were packing it away every body had to sit on it so it didn’t blow away. 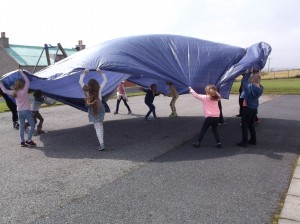