First we learned 4 songs called  Drunken Sailor, Fire in Galley,  Were You Ever in Quebec? and A Sailor Went to Sea, Sea, Sea.       We did the whole story of the Pirates and played a game called Blinking Murderer it was fun. On next Wednesday we drew maps. On next week we went into groups and the smallest person from the group was drawn on a giant piece of paper. Next week Andy Ross was sick. We sang much  better. After the singing we put clothes on our pirates then we made pirate picture and pirate earrings. Sofia, Hannah and Emer did a big pirate ship.We put windows on it, a steering wheel, and an anchor,next week.We practiced the whole performance and made up our own song. Then Andy Ross learned us a short song about animals and now we are looking forward after the October holidays because we are going to do the performance and we will video it to. 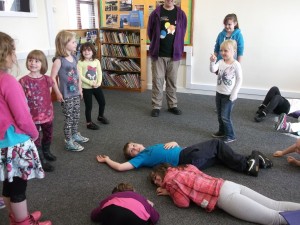 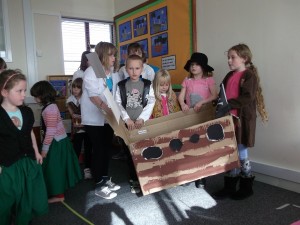