We had to go to the ferry at 08:45 because we were going on a trip to Lerwick. When we got to Lerwick it was about 10:30 which meant it was time to go and watch Anina the movie. The movie was ok, voodoo, a bit mad/crazy. It was a movie about palindromes and punishments. There were clowns and other crazy people in the movie. Then we had lunch outside the museum.

After lunch we went to the lifeboat. When we got there we met the crew and after that we went inside the lifeboat.  There were two guys who jumped off the side of the lifeboat. It was really funny then we had to shout HELP!!! After that we went off the boat and got are picture taken then we went to the life boat station they were stairs when we went up the stairs we saw the old life boat jackets and the new ones we also saw Hewitt clark, he won the most awards and a gold awards for his bravery. Then we went down the stairs and said bye and walked out of the building and walked to the buss. I thought it was a fun day. 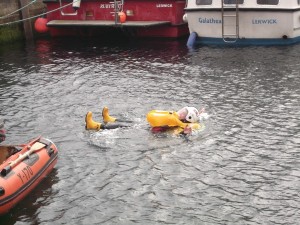