On Tuesday we got a visit from Mrs Miller she came to tell us about the Scottish Parliament. The first thing we did was that we had a quiz on the board and we got little gadgets with numbers on  them and the questions were numbered so you had to press the number for your answer. After that we went into political parties my one was the animal party the other ones  were the music party and the computer party. we had to think up reasons why they should vote for us but you could not vote for your party you had to vote for a different party, when we counted the votes the music party won. But the last thing we did was the best thing we did, I got to be a Presiding officer and I had to say a speech and bang a gavel on the table. 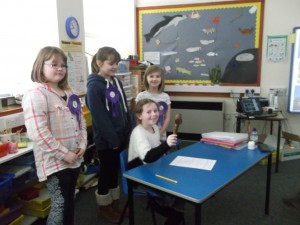