We went to Lerwick on Thursday the  20th of March  to go to Mareel for the Gala concert. The Gala concert is a follow up of the Music Festival with certain acts that were chosen to play from the Music Festival on the Tuesday during the same week .We were one of them so after P.E. we all headed strait home or went to trampolining. When most of us got home we ate our tea quickly and head to the school before 5:00 to catch the  5:30  ferry to Lerwick. Most of our family were on the same ferry as us because they were coming to watch us preform on stage in the auditorium. When we got there we went to the toilet. Then we got lead to the café bar were we sat down for a little while and read the program for the night  we were on 4th strait after Tom Tait and Attie Black who did a  piano duet and they were  the 3rd  group to preform. Then it was our moment to shine again we were all very nervous and very very warm underneath our school jumpers. We played Minnie o’ Shirvas Cradle  for the second time once we had finished we walked of the stage and we were lead  off  back stage to the auditorium balcony. We watched the rest of the acts the  only down side was we missed junior musician of the year Mike Laurenson. After Mike had  finished his song or songs we don’t know  because we weren’t there then we entered the auditorium balcony and had to sit on the steps because they were so many people already watching from the auditorium balcony  but in the end  we got seats after Cunningsburgh School had left we got two rows of seats for us all to sit in. We watched the Bells Brae Boy’s Choir they were very very good. Then we  watched the rest of the acts they were all equally good. I loved them all but the  others might have a different view but I enjoyed it. 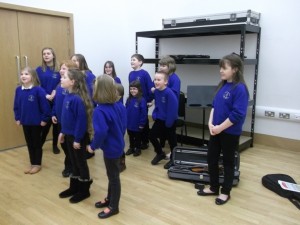