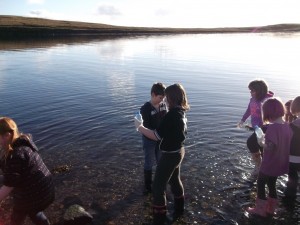 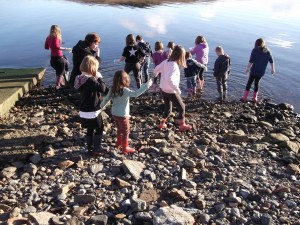 We’re taking part in an Education Scotland Learn Cat project called All the Seas. On Wednesday the 19th of February  it nice day so went to the Marina. Why did we…. because we went to collected sea samples. We put on our boots on and plastic gloves because the water could be polluted and we took water bottles because to put the sea samples in. When we’re finished doing the samples  then were collecting shells and rocks.  We were making a competition who ever thew rock the farthest  wins. Charlotte and Me won. Jennifer found seaweed from the sea. I found mussel shells and broken shell. Everybody threw rocks in the sea at the same time and it make a big splash. Then we have to write about it.