On Tuesday 10th December Burravoe School went to Lerwick on a school trip. Most of us met up at school and caught the bus from there the rest of the Burravoe school met the bus at Ulsta then after a couple of minutes of waiting in the queue, we drove on to the ferry then we all went up stairs.  Some of us played in the play room other sat in the seats provided on the ferry. Then we went  back on the bus and we drove and drove and drove until we got to Lerwick then we headed to Toll clock for a toilet stop after we had all been to the toilet we went back on the bus.

Then we drove to the Energy Recovery Plant when we got there we sat in the meeting room  while Brydon and Libby (who work there) told us about what they do. Then we  got a hard hat each and a pair of  protective glasses to protect our eyes if there were any bright lights that could either badly damage our eyes or blind us. Then we watched a power point that gave us a bit of information before we started the tour of the building. We went into a room and we saw through some thick glass the claw which was picking up rubbish out of a big pit  then an essikert ( rubbish truck) empted rubbish into the pit. We then went down stairs. When we got to  the furnace room we saw the furnace through VERY VERY thick glass because if it was thin they wouldn’t have let us see it because the furnace would melt the glass. I learned that the furnace gets up to 1,200 °C at the highest temperature and the lowest temperature was 1,000°C which is the heat of a volcano.  I could feel the heat on my face. Then we went on the bus and put on our high visibility vests so we could be seen while walking around in the landfill site because of lorries and other vehicles. It was very smelly and it attracted birds.  I learned that the old landfill site is where the running track at clickimin leisure centre is now. Then we went to the District Heating Boiler Station. We met Mr Martain or Nevel whatever you want to call him then we went  into the meeting room he told us about the district heating 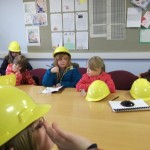 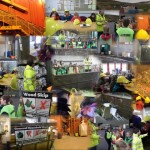 and where it goes like Gilbert Bain hospital, Toll clock shopping center, Lerwick hotel, Anderson high school etc. Then we got torches and then we went home and got the 3.00 ferry home.