On Thursday 14th of November Phoebe and Kerry made blueberry and cranberry muffins using a packet mix. First they washed their hands and then tied their aprons so that if they put their hands in the mix or touched the ingredients then they would have to clean their hands so they wouldn’t get germs in the cakes. Then they measured the butter which was 135 g on the scales and then an adult helped them  melt the butter in a pan and it smelled like popcorn. After they had melted the butter they cracked the eggs and whisked them. Then Phoebe and Kerry mashed the banana in a bowl until the banana turned mushy. Then they mixed the banana, melted butter and the whisked eggs and added the packet mix. They mixed it with a wooden spoon. They got baking trays and put the cake mixture in the oven at 180 C. When they took them out the smelt very yummy. Then they made notes for friends and family. They made stickers to put on the bag of cakes.  On Friday people gave a donation and took a bag of their muffins. 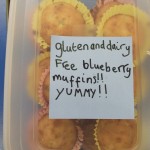 By Phoebe and Kerry