On the 8th of October, we had a lady called Sian Thomas came in to teach us drama. First we stretched our muscles (it is really really important that you stretch your muscles otherwise you could end up breaking your spine! which cannot be fixed! ) Next we played this naming game; where we said our name then did a pose. For example you could do a karate move or a fashion model pose. We timed ourselves to see how fast we could do it in; our first attempt was 45 seconds; our final attempt was 42 seconds. 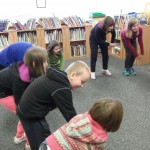 Bending down and making monkey noises! 🙂

Next we had to think of  a character who we could act out, then we got into a line facing each other, then we went around like a factory conveyor belt; talking for 30 seconds learning about other peoples characters. Then we got in groups I went with Mia and Melissa. Our script went like this:
Where: London Olympics 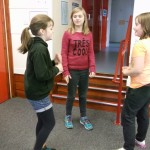 Getting ready for our play fight!