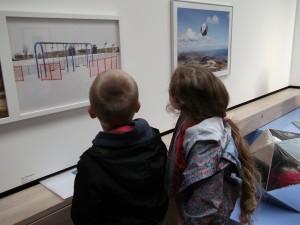 On Wednesday we went to the Travelling Gallery it was nice in there. There was some photographs, paintings, a model and a video. The pictures where nice but I liked the video the best because it was about aliens that where trying to climb a mountain. But the aliens where actually just people that where dressed up. After the video we got to have a walk a round in the bus to look at some of the pictures, books, the model and you could write in a comment about what you liked. I put in that I liked the alien video.  Then it was time to get out of the bus so we did but we said bye. Then we split up into two groups. I went with P1 and P2 my group went to the Shetland Gallery. There was lots of art there we got to see one of the artists. Then after we saw all the art work we got some colouring books then we swapped over so we went to Andy’s and we got a go with mini sowing machien .Then we had to go back to school.